Cricket Derbyshire Foundation ‘bowled over’ as support rolls in for makeover project. But we need more help!

Hodgkinson Builders is rallying the troops in a bid to turn the former changing rooms in the 3aaa Pavilion at Derbyshire County Cricket Club into a room, which can host community programmes delivered by the Cricket Derbyshire Foundation.

The first of these programmes is designed to support and provide advice for those affected by suicide and mental health issues.

The makeover project – which is appealing for local trade’s people to come and help has even attracted support from Craig Phillips of Big Brother fame.

The makeover will take place on Thursday 7 and Friday 8 July, and the Foundation is calling for those wanting to contribute, help out, supply materials, or even make tea, to get in touch.

In 2013, Boynes launched Opening Up Cricket, a non-profit organisation in Lancashire which used the power of cricket to address mental health issues in young adults.

The team now hopes to roll this programme out in Derby at the newly-revamped location.

“In 2012, my best friend Alex committed suicide leaving an irreplaceable void at Sefton Park Cricket Club, where he played as a wicketkeeper, and he left a massive void in my life too.

“Alex had a history of depression and mental illness, but I’d be happy to admit that as a group of friends, we didn’t know how to deal with this. There was a period after where there was no help available to our knowledge, with trying to cope with the after effects of suicide.

“When we found out about a local charity called CALM, we didn’t know it existed. We began working with them to raise awareness, and it led to Opening Up Cricket, which provides mind and body sessions to address suicide and mental health issues in young adults. By using the friendships that develop through playing cricket together, we can address the mental as well as physical health of young people who play cricket.”

“Ian Hodgkinson was keen to support us by turning the former changing rooms into a standalone centre dedicated to providing help and support to those most in need.”

“A few years ago, one of my employees suddenly committed suicide. It is a challenge when you think that everything is against you. What seems impossible can become possible with access to the right help and support. The Cricket Derbyshire Foundation hopes to provide practical support to people who are affected by this awful situation. In particular young men, as it is the biggest killer of men under 45 in the UK.

“We have received fantastic support from Craig Philips, Checkatrade Ambassador, who is set to muck in on day two of the project, and from Checkatrade, which has appealed to its members for hands-on help over the two day period.

“We are aware that so many people are touched by suicide and mental health issues and this space can to be a focal point for groups to use for survivors, carers and to raise awareness of this subject matter.”

The makeover will see the two rooms available, turned into one open space complete with computer terminals, sofas, disabled access and its own toilets.

Once finished, the room will be used to deliver the Opening Up Cricket programme and will also be used for schools for open learning and other community programmes.

Those able to help are asked to contact Andrew Bowley andrew.bowley@ dcbcricket.com, Hodgkinson Builders or Tina Clough at Poppy-PR, who will also be helping on the day.

For more information, or to offer help to the community project, please visit The Hodgkinson Builders website at www.bricklayers.com. 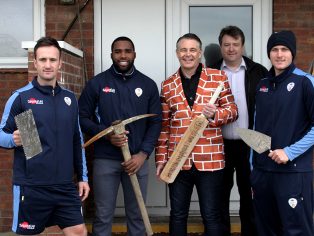