The phrase “it’s all in the planning” was never more apt than when the culmination of months of development and an entire week of on-site preparation resulted in Argent’s Volunteer Day on Friday 5th September.

The project came about when, rather than having a conventional celebration to mark the end of a construction phase at Kings Cross, Phil Sullivan (Senior Projects Director at Argent) and Mick Kelly (Projects Director at BAM) decided they wanted to incorporate something with a little more longevity than a pint or two into the proceedings.

They called upon industry charity CRASH, of which Argent is a Patron company and Director Tony Giddings a Trustee, to source an appropriate volunteering project for 70 people. The remit was to find something that would make the most of the professional skills of the Kings Cross contractors, sub-contractors and supply chain.

“It was quite a challenge to find a project that 70 volunteers with varying skills could undertake. It was also important to everyone involved that the work would prove worthwhile and create a lasting impact for a homelessness charity.”

CRASH invited Argent, along with fellow Patron BAM, to visit Emmaus Brighton & Hove, a homelessness Community which CRASH has been working with for a number of years.
Emmaus offer homeless people a place to live and work, and an opportunity to integrate back into mainstream society. Companions, as residents are known, work full time collecting, renovating and reselling donated furniture and other household goods. This work supports the Community financially and enables residents to develop skills, rebuild their self-respect and help others in greater need.

Brighton & Hove is a thriving Community with a popular café, a main shop offering household goods, an Emporium which houses the very best in vintage, retro and upcycled goods and a garden centre which sells a range of plants, shrubs and herbs grown by the Companions. The Community recently opened a second shop with a café called Emmaus by the Sea, situated close by in Portslade.

“We had a number of projects on our wish list but no resources. So when CRASH approached us with the idea of a volunteering project, we were delighted – albeit a little nervous at the thought of having to find meaningful work for so many people.”

The Community decided to focus the volunteers’ resources on preparing the groundwork and then seeding what will eventually become a wild flower garden and meadow for visitors to enjoy.

A large room in the main shop as well as a considerable part of Emmaus by the Sea were given a much-needed coat of paint. The shingle outside Emmaus by the Sea was replaced by smart new paving, making the entrance accessible for wheelchairs and buggies, and the café will soon benefit from a new kitchen thanks to the ongoing support of Argent.

“I think it’s fair to say that when Mick and I dreamt up the idea of doing a volunteer day, we didn’t appreciate the amount of planning involved, but I suppose that’s what made it so satisfying.”

“CRASH and Emmaus were integral to the successful organisation of the project and were great hosts on the day. The Team had a really fun day working with the Trustees and Companions and were buzzing about their achievements. We’re really looking forward to returning to see how the meadow develops and how the newly decorated rooms are brought back into use.”

The ‘Team’ was made up of an eclectic mixture of volunteers from CRASH Patrons Argent, BAM and Aecom as well as teams from Gardiner Theobold, Allies and Morrison, David Eagle, AKT, David Chipperfield Architects, Townshend, Hargreaves, Hall & Kay, Structal, Severfield, Knight Asphalt and Willerby Landscapes.

Donations of equipment and materials came from CRASH Patrons A-Plant and Dulux Trade as well as Jewsons and Chandlers Building Supplies.

“We are so grateful to you all for everything you have done. This is not just a shop or a garden; this is a home. More than 40 people live here in this Community and this will make such difference to our lives. Thank you.” 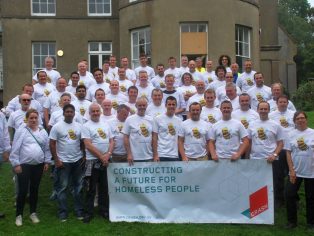