Couple switch from old to new in Earls Barton

After renovating their previous property themselves, Ian and Nicola Clark were glad to down tools and move straight into their brand new home in Earls Barton, Northants.

The couple, who are expecting their first child, have moved up the housing ladder from a two-bedroom end terrace to a three-bedroom detached Warwick at Redrow’s Barley Fields development.

“We thought about extending our old home to give us more space but it wouldn’t have been viable, so decided to more to somewhere bigger. We didn’t want to move out of Earls Barton and had been looking for a while before Redrow launched Barley Fields. It gave us the opportunity to stay in the area and upgrade our home.”

Despite Ian’s brother Phil working for Redrow in Northampton as a senior project coordinator, Ian admits he’d never been interested in buying new until he visited Redrow showhomes in the surrounding area.

Ian, who is an electrician, added:

“The traditional look of the homes was a big draw, plus we’ve got a kitchen/diner that’s well equipped with integrated top brand name appliances and the bedrooms are all a good size.

“We bought off plan and were able to customise it to how we wanted it. Previously I’d gutted our old home and renovated it myself, but moving to a brand new home was much easier.

“It’s nice to be able to come home and not have to get my tools out. Because everything was done for us, it means home is home.”

Current availability at Barley Fields includes a choice of three and four-bedroom properties, priced from £186,950. A three-bedroom detached Warwick similar to Ian and Nicola’s can be purchased from £254,950.

All of the homes at the popular development are available with Help to Buy. The Government-backed scheme enables buyers with a 5 percent deposit to take out an equity loan for up to 20 percent of the purchase price. Crucially the loan is interest free for five years.

Those who choose to call Barley Fields on Compton Way ‘home’ will be able to embrace village living. There are several small shops locally to cater for residents’ daily needs, while the amenities of Wellingborough and Northampton are both easily accessible.

The new homes are ideally placed for buyers with children as they’re within walking distance of the local infants and junior schools. 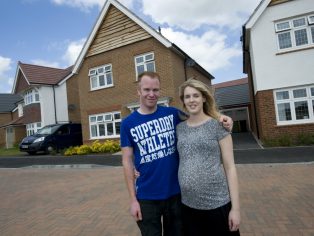 Buying ‘off plan’ enabled Ian and Nicola to customise their new home without having to worry about DIY. Matthew Power Photography www.matthewpowerphotography.co.uk 07969 088655 mpowerphoto@yahoo.co.uk @mpowerphoto