Couple save time and money with a move to Market Harborough

Redressing the work/life balance with a change of address has freed up 10 hours per week for Chris Battye, with the added bonus of more exercise.

By moving from a rural area near Bury St Edmunds to Market Harborough in Leicestershire, Chris and wife Hilary have saved time and money.

Even though their new Redrow home at Rockingham View is further away from London in miles, the capital is now more accessible.

Chris, who’s in his 50s and works in the housing sector as head of business systems, said:

“In the rural location we moved from we practically lived in our cars. Now it takes 15 minutes to walk to the station and from there it’s around an hour to London on the train as Market Harborough has a fast line to the capital.”

“Moving has made a big difference to our lifestyles. I’ve now got a job that I can walk to and Chris has knocked 10 hours a week off his commute. We’ve come to appreciate that we can walk in to town and the railway station. It’s made a significant difference to the amount of time we spend in the car. It’s been really positive as we’re also feeling the benefit of the exercise from walking instead of driving.”

Along with location, specification and ease of living also played a key part in the couple’s decision.

“We almost bought a different house in Market Harborough but did some more research and discovered that Redrow were building in the area. We were aware from recommendations that the quality of Redrow homes is significantly better than their competitors.”

“When we came to Rockingham View we loved the feel of the development with the green areas and traditional look of the homes. It was just what we were looking for. It was an easy decision to reserve within 24 hours of visiting the site.”

As they were looking to downsize they originally considered the three-bedroom Warwick, but then decided on the four-bedroom Stratford. While they’ve moved from a larger four-bedroom detached property it doesn’t feel as if they have any less space due to its design, also their Redrow home is newer, easier to manage and more efficient to run.

“We absolutely love the open plan kitchen/diner as it’s light and airy with a real sense of space.”

“An added benefit of moving has been the reduction in our outgoings and the energy efficiency features are helping with that. Our gas and electricity bills are a lot cheaper. We love the idea that there’s nothing to do to our home as everything is brand new and that no one else has lived here before us.”

Located in Glebe Road, Market Harborough, little more than half a mile from the town’s Sainsbury and Waitrose supermarkets, Rockingham View is ideally placed.

The local train station offers 35 trains a day to London every weekday with journey times from 54 minutes.

Current availability includes a two-bedroom Arden style bungalow priced from £195,950, with four-bedroom detached family homes on the market from £544,950. 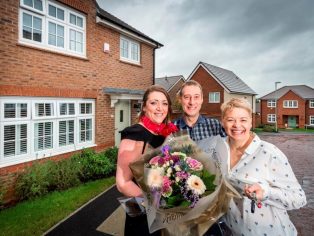