ISG has reached a key construction milestone at its £13.5 million project to build new offices for international independent insurer Amlin plc in Chelmsford. Specially invited guests gathered on site to celebrate the ‘topping out’ of the new building – marking the completion of the highest point of the five-storey structure, which will enable Amlin to consolidate its offices in Chelmsford into a single, purpose-built facility.

Work is progressing well on the construction of the composite frame building, which will provide Amlin with 100,000 sq ft of high-specification, majority open plan office accommodation. ISG has already constructed the building’s concrete frame, which forms the under croft car parking area and four upper floors, and the ceremony was held at roof level to celebrate the completion of the fifth floor steel frame structure, which will house executive offices and a stunning board room.

Targeting a BREEAM Very Good environmental performance rating, the new office building incorporates high-performance building materials throughout and roof mounted photo voltaic panels to generate emission-free electricity. Much of the construction material from three demolished buildings that formerly occupied the site has also been retained and re-used across the development to further enhance the sustainable credentials of the scheme.

“It was a pleasure to mark this important stage in the build project. This building is a clear demonstration of Amlin’s continued commitment to Chelmsford and the local economy. It will be an attractive and prominent feature in the city centre, providing an excellent working environment for our employees and facilitating our company’s continued growth.”

“I’m delighted to welcome so many key stakeholders to mark this important stage in the construction of Amlin’s new offices in Chelmsford. Realising the vision to transform this under-used and complex site into a major commercial hub has been a challenging undertaking and achieving this key milestone is testament to the commitment and ambition of the entire project delivery team.” 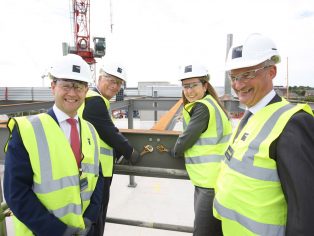