Cardiff-based BAM Construction has placed orders with Welsh businesses worth over £130 million within the last five years, the company has revealed.

BAM has recently begun work on a £16 million contract to build a medical research facility at Cardiff University, and is behind other current projects such as a £12 million redevelopment of Cyfarthfa Retail Park in Merthyr Tydfil for developer Hammerson, and an office building for Morriston Hospital in Swansea.

Tim Chell, who leads BAM in Wales based at Newport Road in Cardiff, said:

“We have developed a robust, effective supply chain within Wales. Over the last five years we have spent over £130m with 240 Welsh small and medium enterprises (SMEs). We’ve always appreciated the importance of utilising effective, local subcontractors who can adapt immediately to the changing needs of a complex construction project. Our category one subcontractors in Wales amount to nearly half of the total number within the Western region. It means that not only do we bring economic benefits to Wales as a result of our projects here, but we export business as well because we use Welsh firms outside of Wales too. Our excellent relationships with the best performing Welsh businesses mean we often want their services in the South West.”

In Merthyr Tydfil BAM is carrying out a £12 million redevelopment of Cyfarthfa Retail Park in for major developers Hammerson. The new 4,000 sq m premises for DIY store B&Q are on land adjacent to the existing retail park.

BAM is converting the existing B&Q building on the retail park into space for Marks & Spencer as well as five further retail units. The existing building was completed and handed over on time.

The new B&Q building features a solar collector, believed to be one of the first in use on a roof in the UK. This is expected to save more than 30MWH per year of heating energy and almost 10 tonnes per year of CO2.

Waste management is being closely controlled during the construction phase, with targets of 30 per cent of material being reused or recycled, and less than five tonnes of waste going to landfill for every £1m spent.

Two smaller units have been built alongside the new B&Q building which BAM handed over in August 2014, and the Marks & Spencer store will be handed over for fit-out in June 2015. The designer for the scheme is Powell Dobson Architects.

“This major project will boost the local economy by improving facilities for shoppers in Merthyr Tydfil.”

At the Maindy Park Campus where BAM is delivering Cardiff University’s Brain Research Institute Centre (CUBRIC) specialist equipment including three MRI scanners and a MEG scanner will be housed in the 6,500 sq m facility. This will require careful liaison between BAM and the equipment suppliers to ensure the building meets the scanners’ precise needs and can house them perfectly on delivery.

As on the Hadyn Ellis project, the company will offer construction and architecture students at the university the chance to have visits to the project tailored to the needs of their studies. 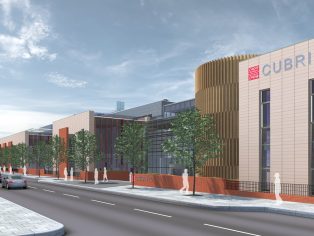