Lancashire apprentice Ben Finch and construction director Keith Collard found out ‘how the other half lives’ when they swapped jobs for a day for National Apprenticeship Week.

Keith, 52, from Chorley, got the chance to get his hands dirty drilling out joists and fitting pipes as a plumber, while Ben, 17, from Wigan, got suited and booted for a day at the office.

“Being ready to go, full tilt, on site very early in the morning was a bit of a shock to the system,” laughed Keith, “and it took me back to my own site-based days. But it was great to be part of the team, working alongside Ben and some of our subbies.”

Although he has worked his way up to construction director from the grass roots of building and various management positions at UK housebuilder Redrow Homes (Lancashire) over the last 32 years, Keith has never been an apprentice.

“Spending time with Ben and seeing his approach to work has really made me appreciate the value of our apprentices,” said Keith, “how much they bring to the business and how much they can promote us to family and friends.

“We have some very committed, hardworking and articulate people like Ben who have a great future in the business. We need to capture more of the Bens in this world and that’s what this year’s recruitment drive is all about.”

Ben is in his second year as an apprentice employed by Redrow but he is attached to Prestige during his apprenticeship.

“I was surprised at how busy Keith was and is,” he said. “A lot of people just assume it’s a straight forward 9-5 job in the office, but his day can be long in different ways. He is out of the office at meetings, seeing people on site, answering the phones, doing the paperwork and keeping a check on everything.”

“When you are working on site you don’t always know what goes on behind the scenes in the office so it was really interesting to learn at least a part of what Keith does and it made me realise that I’d like to take that route in the future. It’s a natural progression.

“Watching and working with Keith gave me a much better perspective of how everything works and comes together, it gave me a clearer understanding of what other people’s stresses are and the things that impact on them. It’s a partnership.”

Redrow Homes has pledged to take on a record 100 trade apprentices this year as it continues to grow its business, including 10 across the Lancashire division. The housebuilder launched its annual recruitment drive to coincide with National Apprenticeship Week (March 14-18). 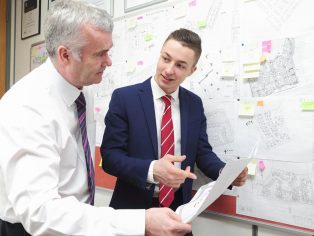 © Redrow Homes / Keith Collard gets stuck in as an ‘apprentice’