Construction has begun on Cité Musicale, an international music hub in Paris, France. Mott MacDonald is acting as lenders’ technical advisor on the project, providing construction monitoring services on behalf of Tempo Ile Seguin1. The scheme is a major part of a new art and entertainment centre on Ile Seguin, an island on the Seine River.

Cité Musicale will comprise a 6,000 seat concert hall and a 1,150 seat auditorium of world-leading acoustic standards, alongside music-oriented commercial areas and business lounges. It will become a central home for the teaching of classical music, incorporating rehearsal rooms, recording studios, backstage dressing rooms and offices. As well as Cité Musicale, the development of the rest of the island will also include gardens, restaurants, a major new modern arts centre, cinemas and an entertainment venue.

“The Ile Seguin development, of which Cité Musicale is a key aspect, will make a significant contribution to the regeneration of south west Paris, generating jobs and attracting international visitors to the area.”

“One of the most remarkable features of this project is the nest-shaped auditorium, which will be wrapped in a woven wood framework and laid over a reflecting pool, creating a mirrored effect. The structure will also feature a 50m high mobile steel sail which will support more than 1,000 sq m of photovoltaic panels, programmed to follow the course of the sun,” Erwann added.

Mott MacDonald previously provided due diligence on the project during the financial close phase.

Cité Musical is due to be completed by the middle of 2016. 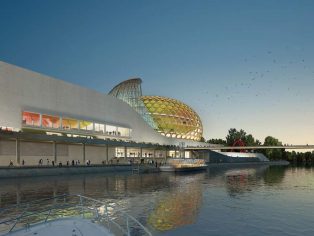