The accolade follows the scheme’s success in winning a RIBA (Royal Institute of British Architects) 2015 Yorkshire Award in April, following completion of the project by the Conlon team last October.

Designed by the Harris Partnership for the Bayford Group, the Blackburn Wing is a striking aeroplane wing-shaped conference centre named after a former resident of Bowcliffe Hall, aviation pioneer Robert Blackburn, who was the first Yorkshireman to design and build a powered aeroplane.

A stunning copper-clad treehouse, the Blackburn Wing accommodates up to 140 conference delegates in a structure that both reflects the stately home’s aviation heritage and respects its woodland setting.

Conlon constructed the building in an area of ancient woodland, painstakingly erecting the conference centre in a natural clearing and working with an aboriculturist to ensure that there was no disruption to the trees either above or below ground.

Conlon installed a layer of crushed stone to the site followed by a geotextile lattice before using a lightweight piling rig and erecting 18 galvanised steel legs to replicate the appearance of a biplane wing.

The development also features a glass facade and a copper roof that will blend in with its natural surrounding as a verdigris patina develops over time.

“The Blackburn Wing is a truly unique construction project that involved considerable challenges.”

“Our focus on buildability and our collaborative approach to working with the design team, the client and the planners meant that we were able to overcome those challenges and deliver a phased programme on time.”

“We’re delighted that the scheme has once again been recognised by this prestigious RICS Award, which will take pride of place in our expanding trophy cabinet.”

“I have been delighted with the hard work and passion that the Conlon team has shown throughout the delivery of the project.” 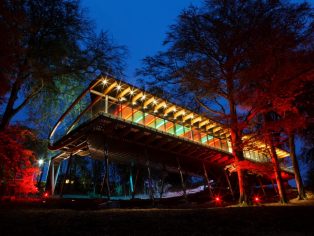