The restored front of the Congress Theatre was officially opened by renowned actor, comedian and writer Michael Palin on Saturday.

The Monty Python star unveiled a plaque on the Grade II* listed building to mark the completion of the project at a cost of nearly £2 million.

Careful restoration and improvements to the iconic façade have enhanced the building’s energy efficiency and will ensure minimal maintenance in the future.

Mr Palin unveiled the plaque, which is made of slate used in the original construction of the theatre in the early 1960s, in front of a small audience which included the Leader of Eastbourne Borough Council, Councillor David Tutt, the Mayor of Eastbourne, Councillor Janet Coles, Eastbourne and Willingdon MP Caroline Ansell, and contractors.

The actor took time out of his busy schedule for the opening before appearing on stage at the Congress Theatre in his two-hour show The Thirty Years Tour.

“It is a pleasure to perform in this magnificent theatre which has undergone meticulous work on its frontage so that it looks the same now as when it was originally built.

“This project has been a huge success and it is great to see a council such as Eastbourne investing in theatres again, as this so rarely happens anymore.”

The Congress Theatre is one of a very limited number of post-war listed theatres in this country, alongside the National Theatre, Royal Festival Hall, Nottingham Playhouse and Chichester Theatres, and is of national architectural importance.

Eastbourne Borough Council appointed heritage consultancy specialists Faithful+Gould to project manage the intricate work which was completed in a year.

The restoration work was the initial phase of the Devonshire Park masterplan to transform the area into a premier cultural and conference destination. 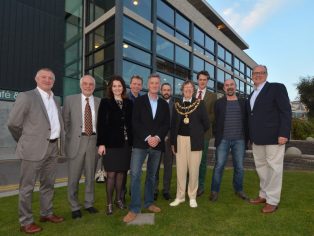