Multi-disciplinary design practice, rg+p has received acclaim for its work in three architectural competitions, including one international Incentive Award.

Architects, 3D visualisers and architectural trainees from the practice’s Leicester office entered the ‘Latvia TabFab’ competition to develop designs for a new cultural quarter in the Latvian capital of Riga; the ‘LAKA: Architecture that Reacts’ competition to devise an innovative solution to a social or environmental issue; and the reTh!nking competition for a new Global Warming Centre.

Architectural assistant, Joseph White led the team for the TabFab competition. “Organised by the Latvian Ministry of Culture, Latvian Academy of Culture and the Danish Cultural Institute, TabFab invited us to create sketch designs to regenerate a former tobacco factory,” said Joseph. “Our design aimed to bring the building back to life; and celebrate its history and new use as a centre of culture, rather than hide it. Our proposal showed the factory becoming a school of performing arts, school of filmography, museum, library and creative business incubator. We designed ‘interventions’ with a sense of semipermanence, drawing inspiration from theatre mechanics, and light boxes reminiscent of those used in filmography. With so many different users of the site, the movement of people was key. The ‘light-box’ interventions emphasised the links between the different buildings, allowing the development to read as one cohesive scheme.”

17 entries from across the world were submitted for TabFab. rg+p was highly commended, receiving an Incentive Award and a 2000€ prize. The practice was the only entry from the UK to achieve this commendation.

For the LAKA: Architecture that Reacts and reTh!nking competitions, rg+p designed ‘The Arctic Seed’; a mobile research station to monitor the effects of global warming across the seasonal ice sheets of the Arctic belt. David Morgan, architectural assistant, explains the concept,

“Inspired by the technology and forces of nature, our proposal consisted of a lightweight, prefabricated and inhabitable pod as a prototype for exploration and scientific research. With equipment and supplies consigned within, the station launches from a support vessel along the periphery of the Arctic shelf and can gather data from a range of sites, in advanced and otherwise difficult-to-access locations, without leaving detrimental impressions in the observed and documented landscapes.”

Again, rg+p received praise for its design, gaining an honourable mention from the judges in both competitions, with the former attracting 130 entries from 30 countries.

“The outcome of these competitions completely exceeded our expectations and we’re extremely proud to compete so successfully on an international scale. The comments we received from judges highlighted the originality behind our designs, which we feel is a real testament to the talent and creativity of our team.”

“We’re now working on a new competition to reimagine a church in York so are hopeful to equal if not better our results!” 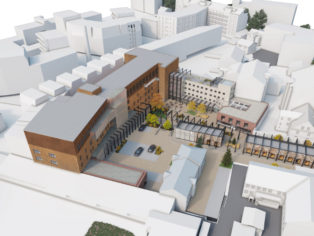