Westminster Abbey is a wonderful 700 year building which is a living pageant of British history.

As a Crowded Places venue welcoming over one million visitors per annum in the heart of London, the Abbey required subtle Hostile Vehicle Mitigation protection that did not disturb members of the public.

Our PAS 68 Compact Terra Barrier, with a SMT foundation specially designed by a third party Consulting Civil Engineers, was the specified Hostile Vehicle Mitigation (HVM) solution for Westminster Abbey. Foundation depths at the location were minimal as there is ancient vault below ground with additional current services. Trial holes taken prior to design during the initial scoping stage revealed less space than previous survey drawings illustrated.

Within the project, Frontier Pitts also installed safety laser beams as safety vehicle detector loops were not an option for the road surface, safety flashing beacons and LED lights in the barrier boom. To excavate the barrier foundations the existing York stone paving was lifted and replaced by special machines.

From the start of the project, Frontier Pitts provided a rental automatic barrier for interim period. 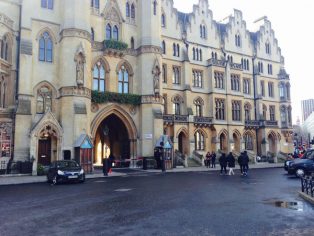 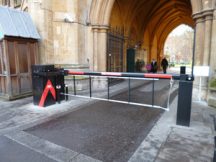