Witherford Watson Mann Architects won the 2013 RIBA Stirling Prize with their exquisitely crafted transformation of Astley Castle, turning the ruins of a 12th century manor into an inspiring house for the Landmark Trust.

Although left thirty years in a state of decay, the castle was still vivid in the collective memory, after decades of use as a restaurant and hotel. The architects respected this memory by, softly but firmly, binding the new structure with the remains. With eight centuries of construction and several states of decay, the detailed design required great invention. The new Astley Castle is no longer a stronghold – it is an unexpectedly porous space suffused with nature and light, providing an ever-changing backdrop to personal celebrations and collective milestones.

But prior to this very public acknowledgement of their approach towards the historic environment, the practice has engaged deeply with the challenges of urban transformation. Over the last decade Witherford Watson Mann have worked in areas which have undergone substantial change, and which, like Astley, have been ruined and recast more than once. Areas such as Shoreditch, Whitechapel, Bankside and the Lea Valley contain the broken remnants of religious or industrial enclaves, or have seen social and economic activity shift from the centre to the edges and back again. In their urban projects Witherford Watson Mann have proposed limited but decisive intervention to bring about transformational change, embracing the social capital and collective imagination embodied in existing structures. With their Bankside Urban Forest and ‘wild river walk’ along the Lea, they have also sought to break open the closed, hard fabric of the city into a richer symbiosis with nature.

In the exhibition at the Sir John Soane’s Museum, and an accompanying lecture hosted by LSE Cities, Witherford Watson Mann will explore the relation between ‘completing’ a ruin such as Astley, and participating in the always unfinished project of the city. With demolition and clearance still the preferred tools of ‘regeneration’ is there a case for a socially and materially richer process? Can an incremental imagination help unlock the capacity that is already there in our cities? What might be the poetics and politics of making and experiencing the city in this way?

The exhibition will feature previously unpublished material on Astley Castle, illustrating the way in which a nimble design response has been combined with an empathetic social imagination to achieve something unique.

The Sir John Soane Museum provides a resonant backdrop to the exhibition, as a building which itself embodies a complex narrative of incremental urban transformation. The Museum’s current restoration project attempts to roll back the majority of dramatic interventions, returning the building where possible to Soane’s original vision and exploring the moral and material choices involved in deciding which built history to return to.

“We are thrilled to be collaborating with Witherford Watson Mann on this exhibition. As clients, The Landmark Trust took the bold decision to select an architect willing to engage directly with the ruins of Astley Castle, producing a sensitive dialogue of materials and volumes. Many of the difficult issues explored in this exhibition posed similar dilemmas for Sir John Soane, an architect who worked in both an urban and rural context, and often on problematic sites with historical structures present.”

“The Landmark Trust saw the Astley Castle project as an opportunity to rescue a shattered and obsolete structure in an imaginative new way, which might help people think differently about Britain’s historic buildings. We are therefore delighted this exhibition will explore the contribution the project can offer to the debate about the future of our cities.” 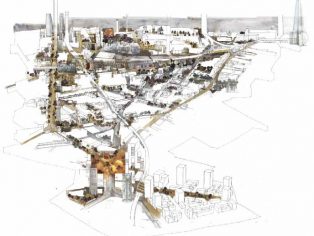