The London 2012 Athlete’s Village was completed last year using 18,508m³ of timber, which is enough to fill 7.5 Olympic swimming pools or stretch (in 2×2 form) the course of 304 marathons. That’s a lot of timber, but what’s special is not just how much there was, but where it came from: it was all FSC® certified – every last stick! The London 2012 Athletes Village (TT-PRO-002826) housed athletes and officials during the London 2012 Olympics and Paralympics, before being cleverly adapted to form the East Village, providing homes for 6,000 Londoners.

In 2012, however, the gold medal for sustainable construction was shared between the East Village, to date the largest project in the world to achieve full FSC project certification, and the Olympic and Paralympic Park itself, which became a world first in securing both FSC and PEFC project certification (SA-PRO-003095), with 100 per cent of wooden inputs certified as ‘legal and sustainable’. This joint-certification has been hailed as a major achievement and a procurement model for other large-scale projects to follow. FSC certified material made up 67 per cent of the 12,500m³ timber products procured.

Project certification is a one-off, site-specific certification that allows clients and contractors to make claims about the FSC timber inputs in a construction project, these claims are backed up by independent third-party auditing. Around the world, more than 70 projects have achieved this certification since the first certificate was awarded to a five-storey timber-framed residential development in London’s Ilford Wharf (TT-PRO-002236) in 2006. Lendlease, who built the Olympic Village, are now committed to achieving certification for all of their projects, as are Marks and Spencer for all new-build stores; this includes M&S Cheshire Oaks (TT-PRO-003615), the biggest and greenest M&S store in the world, and the first retail store to feature a 100 per cent FSC certified Glulam roof.

The Forest Stewardship Council® (FSC) sets standards for good forest management, against which companies are audited to ensure they manage their forests responsibly. There is also auditing of the supply chain to ensure FSC materials can be identified from forest to consumer.

Worrying news coverage about forest destruction has caused some to shy away from using timber, feeling safer with concrete or steel, but FSC and Wood for Good, the UK’s wood promotion campaign, hope that things will change. Boycotting timber can devalue forests and encourage rampant deforestation and slash and burn practices. However, taking care of forests and paying for good wood from fair forests can help make the forests worth more alive than dead and preserve them for future generations. Wood, apart from being aesthetically pleasing, has many excellent construction properties, and wood from sustainably managed forests can be better than carbon neutral.

Last year, Wood for Good launched its Wood First campaign, calling for the introduction of a ‘wood first’ rule in local authority planning guidance. This would require sustainably sourced wood to be considered, where feasible, as the primary construction material in all new-build and refurbishment projects. In stating his support for the campaign, Charles Thwaites, executive director of FSC UK underlined the organisation’s belief that timber, “when sourced from forests managed and certified to our exacting standards, can be regarded as one of the world’s most sustainable materials”.

Using FSC certified timber also helps to achieve top ratings under BREEAM and other such schemes. The Government‘s Central Point of Expertise on Timber Procurement (CPET) has stated that FSC certified timber meets its criteria for both legality and sustainability, of vital importance in public sector contracts. Then there’s the EUTR, which came into effect in March this year; while certification is not accepted as automatic proof of compliance with EUTR, forest certification schemes can play a major role in establishing a ‘negligible’ risk of illegal timber in the supply chain and are an important consideration in risk assessment and mitigation. Purchasing certified timber or timber products with all their associated documentation, together with evidence on species and country of harvest, is commonly seen as one of the most straightforward routes to mitigate risks as an operator under the regulation.

There are a wide variety of FSC certified timber species available in the UK – woods from around the world from home-grown Sitka Spruce to exotic Massaranduba. With over 170 million hectares of FSC certified forests around the world, supplies of certified timber and building materials are increasing all the time. Timber may or may not physically carry the FSC trademarks. Your proof that contractors have actually purchased FSC certified timber products, as specified, is the invoice of the supplier, which should clearly state that FSC certified products were supplied and identify them on the invoice. There should also be a code, specific to the supplier that refers to their FSC chain of custody certification (XXX-COC-######). The validity of certificates can be checked on the international certificate database at http://info.fsc.org/. Information on specifying and verifying FSC timber and gaining company or project certification is available via the FSC UK website at www.fsc-uk.org 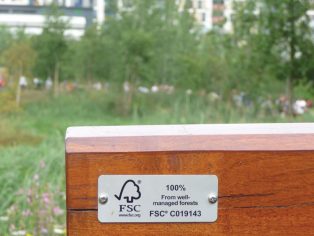 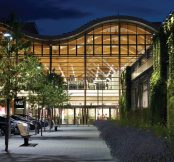