The teams behind the massive redevelopment of the Airedale factory in Leeds – BAM Construction – have donated 170 Easter Eggs to Once Upon a Smile, a charity helping bereaved children.

The Eggs were topped off with a cash donation and some toys, books, and clothing for children who cannot have chocolate.

“I met Daniel from Once Upon a Smile by chance at a football game. When he finished telling me about the work he did I had tears in my eyes. I really wanted to help, so we decided to try a charity Easter egg donation. We thought we’d manage 20 or 30 eggs, but when our clients, Airedale, and our supply chain became involved, and the lady who runs our canteen raffled a huge egg, the generosity was incredible. It’s been a big team effort and I want to thank them all.”

Daniel Jillings, Charity Manager of Once Upon a Smile said:

‘We are absolutely delighted to have been chosen by BAM as their charity beneficiary. This Easter appeal that has been completed will make a massive difference to the families we support. We would like to thank Neil Wright and all the staff that took part in making this appeal a success.”

The charity, which was formed in 2011, supports parents who have lost a partner or and children who have lost a parent by giving financial support, organising respite breaks and providing children’s bereavement support, which Daniel says, “is surprisingly lacking” from other provision. Daniel was joined by fellow actor, Luke Roskell who stars in Emmerdale, to collect the eggs and other gifts.

“Eggs just kept turning up. I could hardly believe it and we had to stack them onto shelves. It’s been really nice to be involved.”

Nadine Gittens, who runs the site catering for this and other construction projects, cajoled the construction and supply chain teams into keeping the donations coming.

“I raffled a huge chocolate egg and we raised so much I was able to buy some toys and other gifts for the younger children or those who can’t have the eggs.”

Work on the £34million factory has progressed well and the BAM team has now commenced the 900 tonne steel frame. The factory was partially destroyed by fire in 2013. It will open at the end of the year. 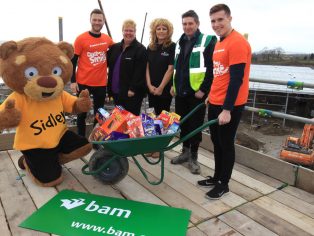