The ‘Hut House’, a new structure built by children and young people at Lollard Street Adventure Playground is opening to the public this Friday. The building is being seen as a new ‘self build’ solution to London’s escalating housing crisis.

Amid the capital’s chronic housing shortfall and an inability to build enough homes for its population quick enough; the ‘Hut House’ was completed in a record six weeks. Designed, procured and constructed by children and young people aged 9 – 14 at the Adventure Playground in South London, the structure has been turning the heads of local youngsters and builders alike.

“We’ve all heard a lot about the potential of self-build, the Wiki House and many other new housing typologies to address London’s housing crisis. Today, our young people have picked up tools and turned their ideas into reality at a speed many in the housing sector would dream of.” Huan Rimington, Risk Agency Programme Leader.

The project was part of a year long youth construction programme lead by charity Risk Agency. Set up by award-winning company Adventure Playground Engineers in 2014, Risk Agency gives young people the opportunity to build their skills, health and confidence by leading construction projects in their own neighbourhoods.

“Today, too many young people are denied the skills, experiences and connections needed to achieve. This project is just one example of what young people can do given the right opportunity’.

“It was amazing to see the kids construct the structure from start to finish. Being given the freedom and responsibility to actually build something this big really meant a lot to the group.” Philip White, Senior Playworker, Lollard Street Adventure Playground. 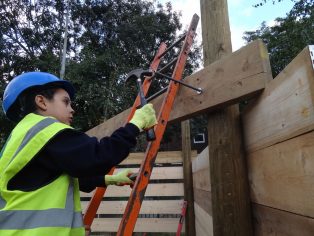