The newly completed transport interchange at Gorse Stacks, Chester, was named the winner of the Medium Category at the North West Institute Structural Awards during a ceremony in Manchester last Friday.

Jefferson Sheard’s Manchester studio was appointed upon the detailed design and delivery of the project for our client, Graham Construction Ltd.

The £13.5m development provides a strategic link to Chester and the wider area while also acting as a transport node to the proposed £300m Northgate development. The Interchange expects to serve 1020 bus movements per day, including national coach journeys, with an anticipated reduction in congestion and an improved user interface for rail users, pedestrians and cyclists.

The striking design incorporates glulam timber beams to create a curved roof form, providing visual interest from within the passenger waiting environment. The roof itself is covered with an extensive sedum system which adds an element of green space to complement the nearby Cathedral.

“Chester Interchange deserves to win an award not only for its striking design but also for its vital role in improving the public transport infrastructure of Chester. It’s really exciting for Jefferson Sheard to be part of this development, which is just the beginning of an exciting new chapter for Chester.”

The project was delivered to BIM Level 2 with Jefferson Sheard in control of the federated model and opened to the public at the beginning of 2017. 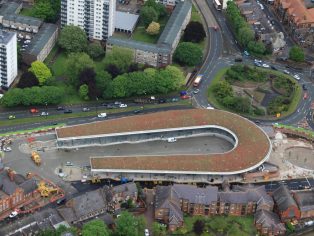