The chairman of one of the UK’s largest housebuilders has called for stamp duty and Help to Buy changes.

He highlighted housing transactions have gone down as stamp duty has gone up and the tax was affecting people’s mobility. He said:

“Stamp duty has a huge impact on the market. Not only do buyers have to raise huge deposits, they then have to find thousands more in stamp duty. The last two increases have been very damaging, particularly to the London market.”

Morgan also called for Government to extend the time limit from application to completion on Help to Buy equity loans to 12 months from the current six in order to help first time buyers to reserve a new build house farther in advance of its completion and compete with investors.

The Redrow chairman spoke at the launch of the developer’s Woodford Garden Village which will deliver around 920 new homes, a new primary school, and significant green space.

“This is the first garden village site for over 100 years in the north west of England and one of the first of a new generation of garden villages with Redrow leading the way. It’s important that we’re creating sustainable new communities that have longevity and Woodford Garden Village is a prime example of that.” 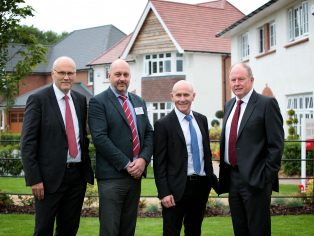 Woodford Garden Village by Redrow was officially opened at a special ceremony on the grounds.