Celotex insulation has been designed to help keep buildings warm and make them more energy efficient – and the panels do their primary job very well. However, one artist has found a different way to use the building material, creating unique sculptural works of art with shining metallic finishes.

The story of these artworks goes back to 2007 when Italian-born artist Rudolf Stingel held a year-long solo exhibition at the Museum of Contemporary Art in Chicago. The show included several examples of Stingel’s work spanning the previous 20 years, and also included a purpose-built entry gallery.

This room was entirely clad in Celotex TUFF-R Zero (GA4075) with the silver foil layer creating an almost mirror-like finish on the gallery walls.

The room was illuminated with a glimmering chandelier, and the result was a shining space, with fascinating light effects and reflections.

Over the course of the exhibition, members of the public were invited to inscribe words and messages into the Celotex panels, and just some of the tools used to make these marks included pens, pencils, fingernails, credit cards and mobile phones. Stickers and notes were attached, business cards and found objects were embedded in the insulating material, and some visitors also saw the art installation as a challenge – who could make the highest marks on the Celotex panels?

Why did Stingel choose Celotex for this project? We can’t say for sure what his reasoning was, but there are a number of reasons why these structural insulation panels would have been a good choice. For example, the reflective foil layer was certainly an important part of the aesthetic of the art installation, while the texture of the insulation board meant the material could be inscribed without difficulty.

In addition, Celotex is lightweight, meaning it would have been easy to transport, and it would have added very little load when attached to the gallery’s existing walls. Cutting it is also simple – it can be done with a knife or saw – and this would have helped to speed up the installation process.

By the time the show finished, all types of graffiti covered the silver surfaces of the Celotex insulation panels, and the result was a marvellous network of scrawls, scratches and patterns.

When the show later moved to the Whitney Museum of American Art, the positioning of the Celotex boards was changed, bringing the panels that had been up high in Chicago, down to within arm’s reach for New Yorkers, providing plenty of new space for visitors to make their marks.

Writing about the exhibition in the New York Times, art critic Roberta Smith acknowledged that in most contexts this would have been considered vandalism,

“Yet here is just one more strategy for a conceptually inclined artist with a strong penchant for provocative, unpredictable ways of painting.”

She added that once the show ended, the Celotex panels essentially became Stingel ‘paintings’, despite the crowd-sourced nature of the marks – and the fact that no paint was actually used.

Once the exhibition at the Whitney was over, the Celotex panels were taken down, and Stingel selected some to be converted to metal. He worked with metalworker Jan Eugster over a period of three years to develop an electroforming technique to precisely copy the panels, re-create them in copper and plate them in metals like nickel and 24 carat gold.

In 2014, one of the Celotex panels was sold at a Christie’s Auction for $1.325 million (£1.07 million). The painting includes a series of small holes dot the middle of the panel, where a viewer must have repeatedly punched at the painting with a pencil or pen, while other lines were created by dragging a stylus across the silver membrane to reveal the yellow insulation underneath.

During 2016, the Gagosian Gallery in New York hosted a year-long exhibition of Stingel’s work, separated into several parts. Part VI, which ran from September 1st to November 1st, featured five of the metal casts. These paintings included holes, scratches, finger marks, and drawings of hearts and flowers, as well as various inscriptions, such as one that seems to proclaim the love of two people named Robert and Georgia.

Whether you’re planning on creating an energy efficient architectural masterpiece, or a smaller-scale work of art, Celotex structural insulation panels could be the ideal product to help you achieve your objectives. For a comprehensive range of specification tools and e-learning video tutorials, visit celotex.co.uk/login. 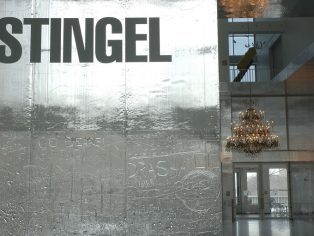