Cartier in Motion, exhibition curated by Norman Foster to open at the Design Museum

Exploring the creativity of Cartier and its links with the history of flight and design in the early twentieth century, Cartier in Motion, an exhibition curated by Norman Foster, marks the opening year of the new Design Museum in London.

The exhibition explores the myriad changes in society at the turn of the twentieth century, through the prism of Louis Cartier’s involvement with the pioneers of the age, including the renowned aviator Alberto Santos-Dumont – for whom he designed one of the world’s first wristwatches – and noted engineer, Gustave Eiffel. It illustrates a time where, amidst upheavals in art, architecture, travel and lifestyles, traces of a new world could be seen.

Norman Foster, curator of the exhibit said: “Louis Cartier and his close circle of friends – who were part of the avant-garde in Paris at the beginning of the twentieth century – personified the beginning of the modern age with its emphasis on motion, speed and flight. Cartier’s interest in aircraft, cars and boats inspired many of his classic designs and marked the birth of the men’s wristwatch as we know it today.”

Cartier in Motion includes over 170 exhibits that will provide rare insights into the relationship between Cartier and design from the Collection Palais Princier de Monaco, Principality of Monaco; Musée de l’Air et de l’Espace, Paris – Le Bourget; Rockefeller Center, New York; private lenders and the Cartier Collection, along with extracts from material found in the Cartier Archives. 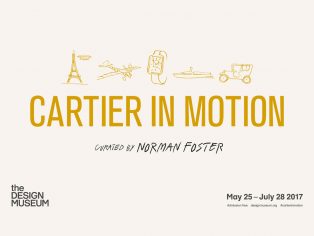 Alberto Santos-Dumont aboard his airplane No. 15, in 1907. Cartier Archives © Cartier

Alberto Santos-Dumont in his Parisian home dining with friends seated on high furniture so that they could experience what it was like to be elevated above the ground. Circa 1900 Cartier Archives © Cartier