The face of Birmingham’s Chamberlain Square changed overnight as Carillion removed some of its iconic ‘residents’ in preparation for the Paradise redevelopment works in the heart of the city.

The statues of Joseph Priestly and James Watt were carefully lifted from their plinths and will be safely stored in Birmingham Museums Trust’s Collection Centre before being returned later in the development. The statue of Thomas Attwood will also be removed at a later date.

Carillion was selected as the main contractor last year for the enabling and first phase of the 17 acre Paradise redevelopment in the city centre and began work on site in January. The Paradise scheme is set to be one of the biggest redevelopment projects Birmingham has seen in a generation and will dramatically transform a whole area of the city.

The removal of the statues comes in readiness for the dismantling and demolishing of the buildings and structures that make up the former Paradise Forum and Central Library site.

Over the past months, Carillion has been working with heritage specialists to prepare for the statues’ removal.

“These statues have been part of the landscape of Birmingham for many years and are an important piece in Birmingham’s rich cultural and historical heritage.

“Careful removal of the statues was of utmost importance which is why, along with detailed logistics planning by our site team, we worked with conservation experts and crane specialists to assist with the removal.”

The work took place during the night to limit disruption to the city and allowing the statues to be safely transported to their temporary home. 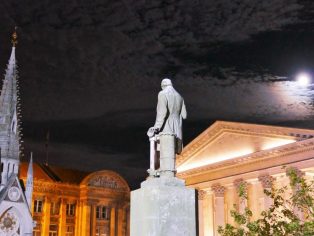