Daniel Zeichner MP for Cambridge visited the site of a new £50 million station north of Cambridge today (1 April 2016), which is anticipated to handle 3,000 passenger journeys a day once opened.

The station, which is due to open in May next year, will serve Cambridge Science Park and the suburb of Chesterton. Funded by the Department for Transport and developed by Network Rail in partnership with Cambridgeshire County Council, Cambridge North station will provide an alternative connection point for commuters in the north east of the city and provide improved access and journey times for passengers.

Work has already started on the project, which is part of Network Rail’s £40bn Railway Upgrade Plan, to build the track, points, overhead line cabling and power supply. New lift shafts and platforms will be constructed from next month. Once completed, the station will have three platforms, parking for 450 vehicles and 1,000 cycles, and solar panels will provide up to 10% of the station’s power.

It is expected that the station will encourage new businesses to the area as well as aid the expansion of existing businesses, and encourage additional employment opportunities. In the meantime, the station will serve staff already working at the Science Park and St John’s Innovation Centre.

Richard Schofield, Network Rail’s route managing director, said: “The new station will both provide benefits to passengers in terms of better connections and journey times, and will also help the economic growth of the area and improve people’s journeys in and around the city of Cambridge.”

“Today I wanted to see what progress has been made and get an assurance that the programme is on track. We need rapid improvements to our public transport and like many people I’m keen to see the station open to avoid gridlock in Cambridge and to unlock future growth.” 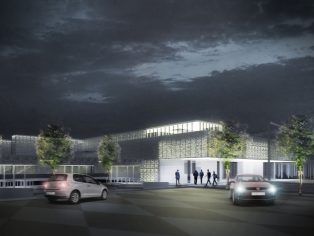