Following opening to the public in August, the elliptical Oculus designed by Spanish-Swiss architect Santiago Calatrava in lower Manhattan recently saw the first opening of its skylight to commemorate the 11 September attacks.

The 160 ft-tall, steel and glass structure functions as the World Trade Center Transportation Hub, providing pedestrian connection between subway lines at Fulton Center and the World Trade Center itself as well as overground trains and the ferry terminal in Battery Park City. It replaces the original rail system which was destroyed in 2001.

The skylight is the focal point of the Oculus, and will open every 11 September. The building also features a Westfield retail mall and plaza, which is set to open when 3WTC is completed in 2018. The Oculus saw a series of delays and design issues, and eventually cost $4.4bn.

The building is sited alongside the southern edge of Daniel Liebeskind’s ‘Wedge of Light’ plaza, and its design followed the masterplan laid out by the American architect, using the angle of light to guide the orientation of the Hub.

Calatrava positioned the building at an angle which is out of line with nearby buildings, so that at precisely 10.28 am each 11 September, which was when the North Tower collapsed, the skylight can be opened (weather permitting of course). The resulting beam of light that hits the floor of the Oculus will visually bisect the space.

The winged design symbolises a dove being released from a child’s hand. Santiago Calatrava commented on the character of the building:

“The treatment of the site creates a kind of pause amid the dense commercial towers. The combination of natural light and sculptural form give dignity and beauty to the building’s lower levels and pedestrian walkways.” 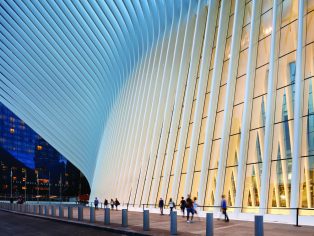 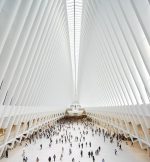