Inspired by the Hanging Gardens of Babylon, standing 120 metres off the ground and designed by award-winning architects, the first London scheme by Yorkshire-based Caddick Developments has been completed and has sold out.

The 36-storey tower comprises 194 private apartments and two penthouses together with 35 affordable and six shared ownership flats. It is a new landmark within the bustling Nine Elms regeneration area – nestled alongside the iconic Battersea Power Station, now one of Europe’s biggest regeneration schemes.

The centrepiece is the inclusion of two floating gardens that are open to all residents for use all year round.

The development is split across a 36-storey tower and an eight-storey block with an inter-connecting one-storey podium. Yoo Design, run by John Hitchcox, provided the interiors. The building’s height and glass exterior will see it emerge as a new landmark in the London skyline.

All of the homes feature their own private internal winter garden as well, with the layouts optimised to offer the best views of London. Developers have prioritised the building’s green credentials by including thermal glass facades which enable the building to use around 50 percent less energy. The panels turn passive glass facades into active transparent solar collectors while at the same time controlling the energy flow through the building envelope.

The success of the Vauxhall Sky Gardens concept encouraged Caddick Developments to push ahead with Moda Living, a build-to-rent joint venture with Generate Land, another Yorkshire-based developer. Backed by Apache Capital Partners, Moda Living has a £1.3bn pipeline of 6,000 premium rental apartments, with high-profile projects in major regional cities such as Edinburgh, Birmingham, Leeds, Liverpool and Glasgow.

While all of Vauxhall Sky Gardens has been successfully sold off, Moda Living apartments will only be for rent.

“Having a proven track record of successful delivery in the regions, we’re delighted to be announcing the completion of our first residential tower in London. Vauxhall Sky Gardens will bring a completely new type of living to the capital, and be an exciting addition to the London skyline.

“There’s something pretty amazing about having this much greenery in such a densely urbanised part of London. But we’re delighted that such an ambitious concept has proven so popular and we know that residents will be able to enjoy not only the views, but the wider benefits of Nine Elms’s regeneration.”

“Sky Gardens in Vauxhall is one of the first sites to be developed in the Nine Elms regeneration area. There is a real energy in this part of town and the team is delighted that Mace have now completed the tower. All the private sale apartments are already forward sold & the project has been a major success. The Tower now complete, provides residents with two sky gardens overlooking Westminster and Chelsea, a 24-hour concierge service and a state of the art communal gym overlooking the communal gardens.”

“This has been a rare opportunity to design and create a truly landmark building, wrapping figments of wonder and modernity around a structure that we hope will become a much-loved part of the London skyline. Being able to offer significant greenery in such a central location is a key part of the appeal.” 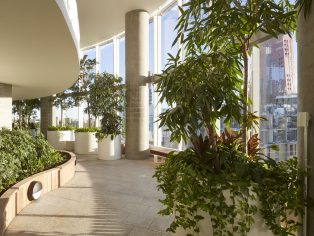