For the first time, #BuildingEquality – the LGBT+ Construction Working Group – was represented in this year’s Manchester Pride Parade.

#BuildingEquality is made up of construction and development organisations all of whom are passionate about working together and harnessing their collective power to drive LGBT+ inclusion and diversity in the construction industry.

Over 60 representatives from member companies and additional construction and development organisations joined the march on Saturday 26 August, representing a huge cross-section of the industry:

Marching in the Manchester Pride Parade marked #BuildingEquality’s first foray to a Pride event in the north of England, after three successful years marching at London’s Pride Parade.

The group marched together to celebrate and champion the contribution that the LGBT+ community make to the industry, to help to promote a more diverse and inclusive industry and to encourage future talent into the built environment.

A bright and eye-catching rainbow-covered JCB digger, sponsored by Mace and provided by Balfour Beatty/Flannery joined the marchers.

#BuildingEquality was founded in 2015 and since then the group has grown from strength to strength. At the group’s first attendance at London’s Pride Parade in 2015, 40 people joined – and this year in London over 300 people marched.

“Marching at Manchester Pride bought together representatives from 13 companies that work across the North-West, including construction companies, consultants, contractors, designers, engineers, property developers and professional bodies in the built environment sector.”

“It’s so important that we demonstrate to people both inside and outside our industry that the LGBT+ community is already making a real contribution to the construction sector day-to-day – and that it can be place where diversity is truly celebrated.

“#BuildingEquality is paving the way for an open and inclusive industry, which promotes discussion on equality and diversity, opening channels for issues and opportunities to be acted upon. Making our industry more diverse benefits everyone – it means we will have access to a wider range of perspectives, ensures that we’re encouraging creativity and ultimately will improve performance and drive innovation.”

Steve Gillingham, Director of the North for Mace:

“Mace was proud to march – alongside others in our sector – in Manchester Pride for the first time. At Mace we recognise that having a company made up of people with diverse backgrounds means that we can give a better perspective on our clients’ challenges and deliver better outcomes for the people of our great city.” 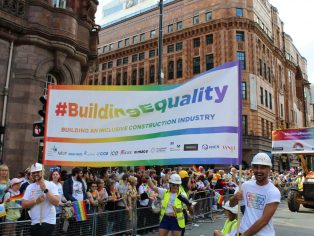 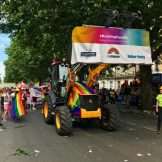