Graham Copson, technical manager at Klober, explains why it’s worth spending time getting the balance between ventilation and airtightness right.

The phrase ‘build tight, ventilate right’ has become synonymous with the construction of low energy buildings, yet awareness of how best to achieve an airtight roof remains poor. Design standards such as Passivhaus and EnerPhit have, without doubt, focused attention on the value of doing so. But with sealants, tapes, air barriers and a plethora of other accessories available, product selection can be a daunting process.

The Energy Savings Trust confirmed that:

so it’s worth putting some time into research and make sure you’re getting the critical balance between ventilation and airtightness right.

Finding out how best to prevent air leakage from the roof space is a good point to start from. With the increasing use of warm roof construction for attic rooms and loft conversions, installation of an air barrier or vapour control layers is essential. However, such barriers can be compromised very easily and if this proves to be the case, tapes and sealants must be used to make any gaps and penetrations airtight.

Building Regulations currently define an acceptable level of air leakage as 10m3/ (hr.m2) @50 Pascals (Pa), and the performance of any home is easily determined by one of the many companies that undertake air pressure testing. To put Building Regulations into some perspective, the energy efficiency standard set out for Code for Sustainable Homes Level 3 was a maximum of 3m3/hr/m2. Despite the Code’s demise, the self-build community has been at the forefront of building homes to even higher standards, achieving Levels 4, 5 and 6. This is where airtightness accessories really come into their own.

One reason why such products have seen inconsistent use is that, until its recent revision, Approved Document Part L had exempted buildings with a floor area less than 1,000 sq m from airtightness testing. This anomaly has now been removed, though for buildings with a floor area of less than 500 sq m an airtightness level of 15m3/hr/m2@50Pa can still be assumed. Given the effort which most self-builders go to in terms of design, construction and material selection, accepting such a level of performance seems highly counter-productive. Air leakage can account for up to 40 per cent of heat loss from a building so if the cost of other energy efficiency measures has been incurred, why put that investment at risk?

The majority of air leakages from roofs take place at junctions and this is why provision of a continuous air barrier is a basic requirement. Tapes and sealants used to seal points at which pipes and flues pass through the ceiling, underlay and roof must cope with extremely difficult surfaces. Membranes in particular can be extremely difficult to bond to so when choosing products it is important to determine the quality of long term adhesion and stability. They must be compatible with plasterboard, metal, glass and rigid insulation where services pass through vapour control layers, even around nails. Double sided tapes have been developed specifically to seal laps in underlays, vapour control layers and air barriers and are multi-functional and relatively inexpensive.

A product such as Permo TR Plus, for example, will repair holes and tears in membranes and seal around solar thermal and PV sealing collars. Flashings have been developed to seal tiles and slates where boiler flues pass through them – the prerequisite here being to have a high degree of stretchability – in contrast to basic foil-based flashings.

A product such as Wakaflex, from Haus Profi, can be used to provide an airtight and weathertight seal for all diameters of flue collar. It is particularly valuable for use with double-lapped tiles and slates, making a job which would otherwise be contracted out to a specialist roofer straightforward. The demands placed on a sealant used on the underside of an underlay at the joint with a rough or absorbent surface also requires a far higher performance than a basic silicone can provide.

The issue of providing adequate ventilation is the final piece in the jigsaw and one which led the NHBC to conclude that vapour permeable underlays alone could not be relied on. Only air-open underlays, of which there are currently just two, can now be used without supporting high level e.g. ridge ventilation. Condensation in the roof space will greatly affect the performance of insulation and the complexity of some roof designs prompted some companies to offer a condensation risk analysis service. Finding out how best to ‘build tight and ventilate right’ has finally become a simple process. 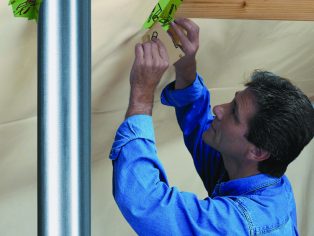 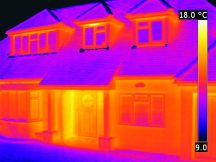