With state-of-the-art facilities, improvements including improved seating, a fast payment system and a stunning façade, the Barclaycard Arena is a world-class venue in the heart of Birmingham, offering a world class customer experience.

Thousands attended the launch of the Barclaycard Arena, which saw a sell-out show from multi-platinum Grammy award winner Michael Bublé, who opened the curtain on a new generation for the Arena by performing to a crowd of almost 16,000 fans, including stars of sport and entertainment.

The most dramatic element of the refurbishment is the brand new glass façade overlooking the Brindleyplace canal side development, which includes a dramatic LCD ‘wonderwall’, distinctive copper fins and iconic Sky Needles – all of which create a dynamic sense of arrival for visitors and a focal point in the centre of Birmingham.

All areas of the Arena have been upgraded in the redevelopment – from the front of house through to the backstage – adding 5,926 m² of pre/post show space into the 13,437 m² of redevelopment.

“Working in close partnership with our client, the NEC Group, our expert design team has delivered a new world-class venue in the Barclaycard Arena.”

“By cloaking the Arena’s canal-side elevation with an elegant glass façade, which affords four storeys of new bars and restaurants dramatic views over the city, we have been able to project the excitement of the bustling activity going on inside the venue.”

“’The official launch will see the project joining our portfolio of high-profile and completed schemes in Birmingham – which includes Bournville College and Edgbaston Stadium – with our team also currently delivering the new Adagio apart hotel in the Beorma Quarter, Digbeth.”

Earlier in the year Broadway Malyan celebrated the completion of the 25,000-seat ‘Hassa Bin Zayed Stadium’ in Al Ain, UAE, which is part of a wider 1.5m square foot mixed use development masterplanned and designed by the practice, as well as the iconic 9,000-seat National Gymnastics Arena in Azerbaijan. 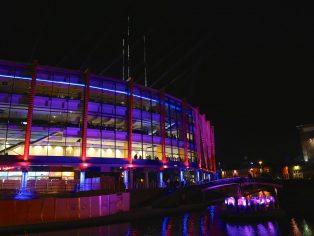