The global architect, urbanism and design practice has already designed the partnership’s first school at Wuxi Taihu New City and the second school will be in Hangzhou to the south west of Shanghai. Both schools are due to open in 2018.

The commission is Broadway Malyan’s fourth large school campus in China having been involved in the design of two facilities for Dulwich College Management International and Shanghai developers.

The 117,000 sq m campus will accommodate more than 3,000 students including 1,500 boarders and Harry Hoodless, Director of Architecture at Broadway Malyan’s Shanghai studio, said the school represented an emerging typology as traditional Chinese schools and English Language International Schools (ELIS) combined onto one campus.

“While all Chinese students must study the national curriculum, this relatively new model of affiliated bilingual schools supports a design approach that embraces the local code but also delivers cohesion between international school and Chinese school students through learning hubs and key external places for interaction.

“Ensuring there is the right blend between International and Chinese school thinking is a crucial consideration as we look to deliver increasingly progressive school designs that cater for integrated technology and embrace the latest pedagogic methods.

“On this campus there is a strong relationship between the buildings and the landscape and while there is an allusion to the host school in the UK, we have strongly referenced the character of the local tea terraces and generated three distinct building typologies in line with their function.

“The development is grouped around separate school community and scholastic axis and at the intersection of these, the school hub provides an interactive and outward looking space at ground floor with views up to a modern library above.” 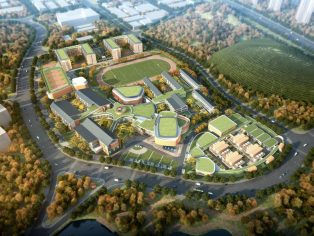