Yesterday saw the official completion of Liverpool School of Tropical Medicine’s (LSTM) latest phase of expansion with the opening of the Wolfson Building, a £7 million project which will house the Centre for Maternal and Newborn Health (CMNH), the Centre for Neglected Tropical Disease (CNTD) and Innovative Vector Control Consortium (IVCC).

The building, officially opened by LSTM’s Patron, HRH The Princess Royal, is the latest in LSTM’s continued development, cementing its position as one of the leading international institutions in the fight against infectious, debilitating and disabling diseases. Formed in 1898, thanks to a £350 gift from successful shipping merchant Sir Alfred Lewis Jones, LSTM now employs over 430 people and educates 600 students from 68 countries each year.

The Wolfson building is part financed by the European Regional Development Fund Programme 2007 to 2013, along with support from the Regional Growth Fund and The Wolfson Foundation. It comprises of office space and meeting rooms for CMNH and CNTD as well as the product development partnership IVCC, which is currently housed in the Centre for Tropical Infectious Diseases.

During the opening ceremony Her Royal Highness was treated to a number of short presentations about the work of the groups housed in the Wolfson Building, and met with LSTM’s Director, Professor Janet Hemingway CBE, who said:

“The opening of the Wolfson Building is yet another landmark in the history of LSTM, which was the first institution of its kind anywhere in world. It will further increase our opportunities to bring the very best in research and scientific innovation out of the lab and directly to the people who need it most, enabling LSTM to continue its work to tackle some of the most challenging health problems in the world today.”

“Working in close partnership with our client, we have carried out a major conversion and remodelling of an existing residential building to create a new grade-A workplace fit for a world-leading research institute. The official opening will see the project joining our portfolio of high-profile and completed schemes in Liverpool.”

The design encourages interaction in the building and engenders a united team culture. It includes the creation of several large voids throughout the building linking floors, while the new roof provides a continuous north light, which floods daylight down through the building.

It also features an external over-cladding which relates to the work of the Institute, with vertical banding created by perforated panels referencing the ‘bar codes’ created by genome sequencing. The effect is further enhanced by night-time back-lighting, which creates a focal point for the Institute’s expanding campus, and provides glimpses into the building. 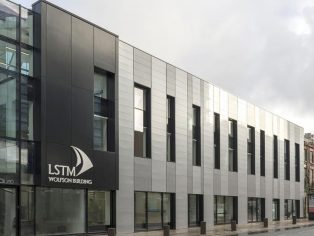