Bespoke spiral staircase manufacturers – British Spirals & Castings – has helped to restore a 19th Century villa in Harrogate to its Victorian splendour with a decorative spiral staircase with matching balconies.

The three-storey house was converted into separate flats in the 1960’s and a metal fire escape was installed. Whilst serving its purpose, the industrial style stairs clashed with the traditional sandstone of the building and intruded on the privacy of the lower flats.

The owners contacted British Spirals & Castings to create a piece that was more in keeping with the architectural style in the surrounding conservation zone. The family run manufacturers produce all their cast aluminium balconies, straight and spiral staircases at their Staffordshire foundry, ensuring premium quality results. They also offer a wide range of hardwood staircases along with cast and wrought iron railings and gratings – all produced here in the UK.

To complement the age of the property, the Victorian style cast aluminium stairs and balconies were chosen. For the balustrading, the owners opted to alternate between a simple spindle and an ornamental panel. This reflects the more ornate style of the Victorian period whilst also meeting the Building Regulation requirements. Perforated gratings allow light to filter through the balcony floors to the windows below. As a final touch, fleur de lis style finials were also used to top the uppermost balcony.

To ensure a strong structure, the expanded balconies were designed with two main posts (including the central post of the spiral staircase) and decorative gallows brackets. The balcony gratings were carefully measured and manufactured to slot around the existing down pipes. A narrow diameter spiral staircase was selected to prevent the stairs directly passing any windows — giving each homeowner privacy.

“This project was far from easy but the staff at British Spirals and Castings went out of their way to help us,” Alison Gould said. “Any issues were always sorted cheerfully and positively, and I’d strongly recommend them to anyone looking for something similar. The simple description ‘balcony and fire escape’ doesn’t really do it justice. It looks awesome and beautiful!” 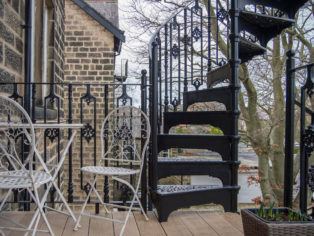 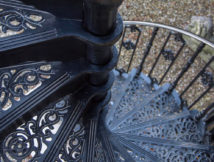 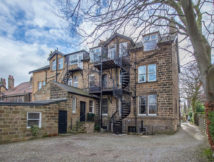