Leading the way for housing design, Redrow Homes has scooped a prestigious award at the British Home Awards while also on the panel to announce the winner of the “Homes for Britain” design competition.

It was fitting that Redrow was singled out for the Best House Design (less that 50 units) award for one of its current house styles – the five-bedroom Highfield – as the national homebuilder was also one of the partners that announced ArcHouse as the winner of the “Homes for Britain” competition.

This year’s competition, run in partnership with Redrow Homes, H+H UK, The Architects’ Journal and BRE, challenged architects to design a house type for the future, suitable for the UK’s Garden City developments.

It is planned that Redrow will now investigate the feasibility of developing ArcHouse, a design created by Glasgow-based McInnes Gardner Architects.

At the awards presentation in London the chair of the panel of judges Professor Robert Adam, director at ADAM Architecture, together with Helen Davies, editor of The Sunday Times ‘Home’ supplement and Redrow Homes’ Group sales and marketing director Dave Bexon, announced ArcHouse as the country’s choice for a Home for Britain.

“At Redrow we are always looking to stay one step ahead of the competition through innovations in quality, design and specification. It was therefore an obvious choice for us to support this prestigious competition, which shines a light on the future of British house building and design.

“We were very impressed by the standard of entries but ArcHouse stood out to us as a home that we could envisage being part of the UK’s future garden city developments, with its prominent arced roof line and three-storey layout. We’d like to congratulate McInnes Gardner Architects on their winning design and thank everyone for entering.”

The Sunday Times British Homes Awards have been pivotal in providing a catalyst for change in the creation of new homes. The awards, and in particular the annual design competition, inspire architects and designers to join with enlightened homebuilders and developers to challenge conventional practice to shape great places to live, with a real sense of character and identity.

Redrow’s own British Homes Award winner, the Highfield, is a luxury five-bedroom detached residence of 3,578 square feet, with additional over-garage space that could potentially be used asa home office, play space, home gym or even as a granny flat or grown-up offspring’s crash pad. 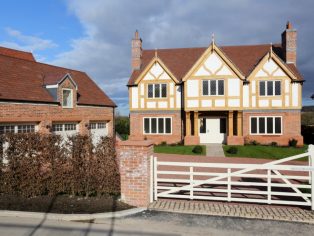