British Council for Offices announces finalists in ideas competition: Imagining the office of 2035

The British Council for Offices (BCO) has announced the three finalists in its NextGen ideas competition which was aimed at the next generation of office professionals.

The competition asked multidisciplinary teams of young architects, designers, engineers, developers, agents and other professionals and consultants to consider ‘the office of 2035: what it will look like, and how it will support the way we will work’.

This one-stage, free-to-enter contest launched in May at the BCO Annual Conference 2017, and the BCO was advised on the process by Malcolm Reading Consultants.

A total of 34 teams entered, submitting their proposals in the form of an illustrated report, with additional media including a video permitted.

A judging panel comprised of members and advisers of the BCO met earlier this week to assess the submissions, looking for forward-thinking and innovative responses that challenge the conventionalities of today’s workplaces and anticipate future needs.

The final results of the competition will be announced at the BCO NextGen Awards Dinner on Wednesday 15 November, with the winning team receiving an invitation to attend the 2018 BCO Conference in Berlin.

‘After an intense, stimulating judging process, we’re delighted to reveal the three finalists in our NextGen ideas competition.

‘Each has responded thoughtfully to the brief and put forward a thorough, compelling and beautifully presented proposition.

‘These finalists should be congratulated for their creativity and for managing to stand out among the many impressive submissions. We look forward to announcing our winner next month.’

‘I would like to thank all the teams who entered the competition for their energy, resourcefulness and commitment; we hope all the participants will benefit from the experience.

‘The judges were highly impressed with the clarity of thought behind the submissions, which help demonstrate how innovation and creativity can solve complex problems and turn challenges into industry opportunities.

‘The future of the BCO – and of our industry – is clearly in extremely ambitious and capable hands.’

The three finalist teams (in alphabetical order), and a short outline of their proposals, are given below:

88mph propose ‘The Dynamo’, an adaptive reuse of an existing terrace of Victorian housing in London as the headquarters for a major energy company. The concept retains the existing façades and incorporates reconfigurable interior space, service cores plugged into the back of the building as an ‘energy backpack’, and facilities including a rooftop garden with staff allotments, a performance space and a meditation garden. The design responds to a future with increased transport connectivity across the UK: the company’s facilities are accordingly dispersed more widely throughout the country, but they retain a physical presence in the capital that is flexible and open to future changes.

Four Future propose ‘The Nest’, set on the Greenwich peninsula surrounding the O2 arena. A public meadow is placed over the top of the existing arena and surrounded by ‘nest’ buildings. The form of these is based on the triple helix, with three occupiers (government, business and university) each occupying a third of the space, stacked in sequence around a central atrium. ‘Garden pods’ at the building’s edge incorporate biophilic design principles and offer access to nature, and a ramp wraps around the exterior of the building, allowing access via a variety of means to all levels.

GTASC propose ‘Network Space 2035’, a flexible network of working environments. Their central London site, close to the Barbican, the square mile and Farringdon Crossrail, incorporates a ‘Central Hub’ building which will be inhabited by multiple tenants alongside education, public, health and hospitality facilities. Community incubators, remotely connected to the hub, provide alternative working environments and platforms for start-up companies. The building form is adaptable, allowing the creation or reduction of space depending on future needs and uses. 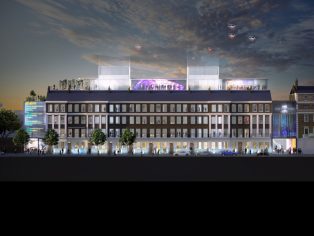