In a bid to boost the country’s number of budding brickies, the Brick Development Association (BDA) is taking its #LOVEBRICK roadshow to a number of colleges around the country.

The BDA is working with the Association of Brickwork Contractors (ABC) to drive the study of bricklaying forward and increase the number of skilled bricklayers in the construction industry.

The number of skilled bricklayers in the UK is at an all-time low, following the credit crisis in 2008 and the downturn in the construction industry. Now that the industry is in a phase of recovery and growth, the need for more apprenticeship schemes is essential to avoid a fall in output. This initiative, supported with funding from the Construction Skills Training Board (CITB), aims to raise the awareness and knowledge of brickwork and the important contribution it makes to the Built Environment.

Titled #LOVEBRICK, the initiative will be delivered to a number of colleges throughout the country in a series of workshops and presentations by the BDA, brick manufacturers and brickwork contractors. Students will have access to specifically written technical guides, presentations and demonstrations, as well as regular communication through social media platforms.

“We want to encourage people to learn the skills and crafts of bricklaying, so it is essential we invest in the training and development of the next generation of bricklayers. Not only will this increase the jobs in the brick industry and the number of homes built, but we will be preserving one of the oldest and greatest building materials ever devised.”

With 10 colleges participating in 2014, it is hoped that #LOVEBRICK will be rolled out further next year. 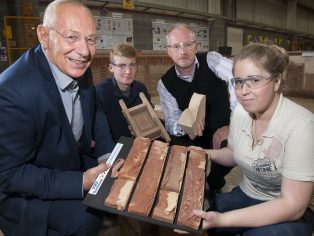