The majority of UK energy efficiency suppliers and consumers favour Britain to remain in EU, according to a survey.

The latest issue of the UK Energy Efficiency Trends report, which is delivered by a research partnership between EEVS and Bloomberg New Energy Finance, asked respondents what referendum outcome was in the best interests of the sector.

Suppliers appeared overwhelmingly in support of an ‘in’ vote (79%) with 7% opting for ‘out’.  Nearly two thirds of consumers (64%) also showed a preference for Britain remaining within the EU, but 30% were still undecided and 6% voted to leave.

The sector’s main concern was the rising cost of energy saving technologies, with 57% of suppliers and 42% of consumers expecting prices to rise. Another worry was whether the UK government would roll back popular EU-led policy initiatives.

Commenting on the findings, Ian Jeffries, Director at EEVS, said:

“From this research we see that the UK energy management sector has planted itself firmly in the ‘remain’ camp on the Brexit debate.

“As well as an expectation that ‘leave’ would drive up the capital cost of energy saving technologies for consumers and lead to higher energy prices for all, both suppliers and consumers were fearful that the UK government’s poor record on energy efficiency would see well-established and popular EU policies that support energy efficiency, such as energy performance certificates in buildings, being scrapped to the detriment of the sector.”

The survey also found that suppliers and consumers were broadly positive about the impact of EU policy initiatives on the UK’s uptake of commercial sector energy efficiency. Respondents agreed that the following EU policies had had a positive impact:

* Of the remaining 52% in both cases, the majority stated they didn’t know if these policy initiatives had increased the uptake of energy efficiency, suggesting a neutral view.

The report showed that uncertainty around Brexit had impacted 60% of supplier respondents’ business investment decisions but had no impact on EU-based orders, staff recruitment or sale prices.

The EU Referendum takes place on 23 June and will decide if the UK should exit the European Union or remain within. 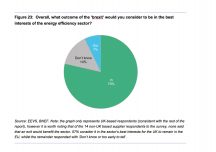 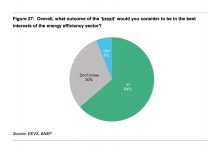