Borders Railway has been named the Royal Institution of Chartered Surveyors’ Scottish infrastructure project of the year.

The project was recognised yesterday (Thursday, April 14) during a ceremony in Edinburgh for its delivery of essential facilities, services and infrastructure.

The £294m Borders Railway re-established a passenger rail link for the first time in over 40 years from Edinburgh through Midlothian to Tweedbank in September last year.

The project included the installation of 30 miles of new railway and seven new stations as well as the upgrading and building of supporting infrastructure.

The new railway, the longest domestic line built in over a century,  welcomed more than 500,000 passengers within the first five months of it’s opening.

“The new rail network addition is highly popular and the judges could not fail to consider the project’s delivery time, quality and inherent sustainablity credentials.”

“With passenger figures exceeding expectations, the investment in the railway is really paying dividends and it’s great to see the positive impact it’s having socially and economically for the local communities along the route.”

Borders Railway will join all category winners to represent Scotland in the RICS Awards Grand Final which will take place in London in October. 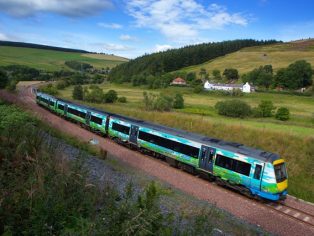