Sir Bob Kerslake has been elected an Honorary Member of the Royal Town Planning Institute (RTPI) for his outstanding contribution to helping promote the value of town planning.

Lord Kerslake is the former Head of the Civil Service and current chair of Peabody and London’s King’s College Hospital NHS Foundation Trust. He is also the President of the Local Government Association.

“I am delighted and honoured to accept the Honorary Membership. Throughout my career I’ve sought to maximise the benefits to the community through planners and the planning system. I look forward to working with the RTPI to promote the value of planning to society.”

“Lord Kerslake has made an enormous contribution to promoting the value of planning in creating prosperous places and vibrant communities. He has been a tireless advocate for the profession and it is my privilege to present him with Honorary Membership on behalf of the Institute.”

·         Chairing the IPPR commission into affordable homes in London in 2015
·         Chair of the Centre for Public Scrutiny, an independent charity seeking to promote good governance
·         Elevated to the House of Lords as a Crossbench peer in 2015
·         Serving as Permanent Secretary at the Department for Communities and Local Government (DCLG)
·         First Chief Executive of the Homes and Communities Agency (HCA)
·         Holding a number of distinguished posts in the public sector, including Assistant Director of the Inner London Education Authority (ILEA), Director of Finance and then Chief Executive for the London Borough of Hounslow and Chief Executive of Sheffield City Council.
·         Being awarded a knighthood for his services to local government in 2004 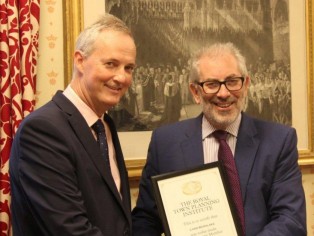