One of the final bridges to be rebuilt as part of work to electrify the railway between Manchester and Preston re-opened on 15 October – over four weeks ahead of schedule.

The bridge on Grimeford Lane, Blackrod, was shut on 27 July to be rebuilt to provide enough clearance for overhead lines which will power electric trains. At the same time, Bolton Council have resurfaced the road while it was closed. It was originally due to reopen on 16 November.

Electrification of the railway between Manchester and Preston is part of a £1 billion investment to improve the rail network and infrastructure across the north of England, improving rail services and helping to support economic growth. An electrified railway helps to provide a cleaner, faster and more reliable railway for passengers with much needed additional capacity.

“I would like to thank residents and motorists for their patience while we have completed this work which is part of our Railway Upgrade Plan to provide a better railway for passengers. It will allow faster, greener and more frequent services to operate and we did all we could to complete the work as safely and quickly as possible. We also worked closely with Bolton Council which completed its work at the same time to minimise disruption.”

In under two years, Network Rail has rebuilt 15 road bridges and four footbridges on the line between Manchester and Preston via Bolton — along with demolishing one bridge which is no longer used and rebuilding the River Chor Aqueduct in Chorley.

“The hard work and professionalism of everyone involved has enabled the work to be completed safely and quickly. There is never a good time to close roads but we did all we could to minimise the impact.”

“It’s great that the road is opening weeks ahead of schedule. Also it was good that while the road was closed we were able to resurface it and improve it. Residents have had to put up with a lot of disruption and I’d like to thank them again for their patience”.

The new bridge will not need any major work for over 100 years, benefitting the local road and rail network. 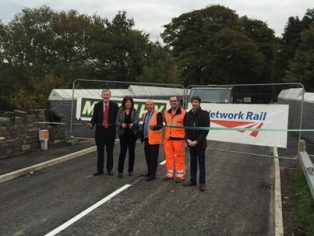