Proposals including Birmingham’s tallest office-led building have been unanimously approved by the city’s planners.

The proposals include a 30-storey mixed-use tower with retail space, 155,000 sq ft of Grade A office space and 125 apartments, each of which will have a private winter garden with spectacular views across the city.

Also proposed are a seven-storey office building with 30,000 sq ft of Grade A space and a 13-storey building with 69 apartments, four work/live units and ground floor retail space. At the heart of the development is to be a new public square called Orwell Place.

The first phase of the scheme – which included the refurbishment of the former Bullring Markets Coldstore building into an office complex and innovation centre as well as the development of a new Adagio hotel – was completed earlier this year.

“The first phase of Beorma Quarter is now complete and Salhia believe that the market conditions are right to move on to the next phase of the scheme which is set to transform this important and historic part of the city.

“The name of the development itself harks back to the ancient founder of the city. The scheme has changed significantly since original proposals were approved in 2009, however we have striven to pay homage to the area’s historic roots and retained the concept of expressing the site’s medieval burgage plots in the design of the tower.

“The primary facades of the tower will also be faced in sandstone to reflect the underlying geology of the area and to ensure the development remains in keeping with its surroundings where it will act as a bookend for the Selfridges building along with St Martin’s Church.

“This scheme will be on the doorstep of the proposed HS2 station and we believe it will not only provide a suitable backdrop for such an important gateway to the city but will be a popular location for occupiers and residents who want easy access to this international rail hub.”

Enabling works are set to commence on site this month. 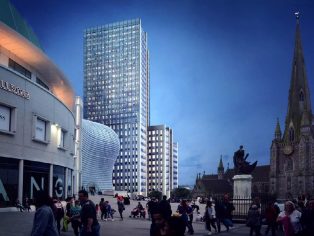 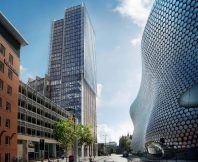 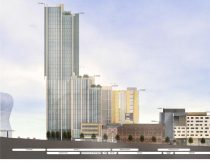