With less than a week to go until the stunning Birmingham New Street station is unveiled, a further 18 retailers have been confirmed.

From Sunday (20 September) a number of exciting new shops and restaurants will begin to open including three brands new to the Network Rail estate – Moleskin, Joe’s Coffee House and Five Guys.

Dutch retailer Hema, will also open its first store outside of London while other brands including Hotel Chocolat, Oliver Bonas, Leon, Benugo and All Bar One will help reinforce the station’s appeal as a destination in its own right.

With a new Doddle store at the station – the second in the city – it will now be easier to collect, send or return parcels, removing the hassle from online shopping and giving more choice to passengers. Other stores such as JOY, The Body Shop and Paper & Script will complement this new offer which will provide opportunities to buy stationary, gifts and fashion.

“We want to create truly exceptional places for passengers and visitors, and are pleased to introduce these exciting new brands to Birmingham New Street station. They will not only cater for over 72 million travelers who use the station every year, but will also provide more choice for the thousands of office workers and local people who use the station but are not travelling.”

A spokesman for All Bar One said:

“All Bar One are very excited to be part of Birmingham New Street station. We already have four bars in Birmingham, two in the city centre and two at Birmingham International Airport, and opening this fifth site, in a travel hub completes the set.”

“Opening a new Doddle store at Birmingham New Street is a really exciting moment for us. Missing a delivery is a real pain and costs the industry up to £3/4 billion a year, a cost which is inevitably passed onto consumers. We’re looking forward to doing our bit to help the people of Birmingham make online shopping a doddle by providing a convenient place for commuters and people working and living nearby to receive their deliveries and return unwanted items.”

Network Rail wants to create truly exceptional places for the 170,000 passengers and visitors who pass through New Street station every single day. Recent footfall studies have shown that up to 25 per cent of people who use stations are not actually travelling but instead come to visit shops and food outlets. As a result station-based retail businesses are now significantly outperforming high street shops

The station will open on 20 September, while Grand Central and the new John Lewis store open on Thursday 24 September.

The end of September will be a busy time for Birmingham with the new shopping centre opening, Rugby World Cup matches at Villa Park and the fan zone at Millennium Point, the Birmingham Weekender and events at the Barclaycard Arena and NEC. As a result, passengers are being advised to allow extra time for their journeys, be prepared for a busy station and city centre and to know their last three to four trains and not rely on the last one. 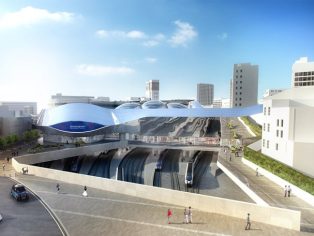