Since opening its doors to the public in 1759 as the world’s first national public museum, the British Museum in Bloomsbury, London, has been renowned for almost three centuries for bringing together the most diverse human cultures across the globe.

With a permanent collection of around eight million pieces of work, the public institution is continuously evolving and updating to ensure it provides visitors with one of the largest and most comprehensive collections in the world.

As part of this ongoing commitment, the British Museum has undergone a significant three year renovation project, which has created a pioneering new gallery that provides visitors with creative and interactive ways in which to engage with the artefacts.

Throughout the renovation project, Bilco UK was specified by global architects, HoK, to supply 21 of its innovative and resilient SS-50TB Ladder Access Roof Hatches, to allow for regular routine maintenance activities in the roof void area of the new exhibition space.

The new Albukhary Foundation Gallery of the Islamic world is located at the very heart of The British Museum and comprises two refurbished galleries. The collaborative space houses a broad and diverse spectrum of the material culture produced from the seventh century to the present day throughout the Islamic world, spanning a series of regions from West Africa to Southeast Asia.

Formerly known as the ‘White Wing’, the two galleries had previously been closed to the public for a number of years due to its need for renovation. In light of this, the redesign was viewed as an opportunity to change and widen the scope and interpretation of the exhibits, which was achieved by joining the two galleries together as a single expansive space.

When the two galleries were originally completed in 1885, the roof of the White Wing was laid in lead, which was later replaced with copper in the 1960s. As part of the latest renovation project, the copper was replaced with 45 tonnes of new lead, along with overhauling the existing roof timbers and boarding.

The 21 SS-50TB Roof Hatches were specifically made in bespoke sizes by Bilco for the project and were chosen due to their ability to sympathetically blend into the exterior of the new lead roof due to a high quality PPC finish.

Longevity, performance and functionality were key factors throughout the specification process, with the SS-50TB’s advanced engineering fulfilling all requirements. The thermally broken cover and specialised frame design ensure superior thermal performance, while the design of the hinges safeguard against external elements.

As the British Museum requires regular access to the roof of the new gallery, the SS-50TB’s compression spring operators allow for frequent, safe and secure one-hand operation, regardless of the size of the hatch.

This is also supported by an automatic hold-open arm and grip handle, which locks the cover in the open position and allows for easy, one-hand release and closing. Every design element of the roof hatch has been created to enable the user to maintain three points of contact at all times.

The hatches are also fitted as standard with a closed-cell EPDM sponge gasket, which ensured weather tightness and energy efficiency through its enhanced seal of the cover to the curb. The SS-50TB has a Class 1 rating under BS EN 12207:200 and is compliant with the requirements outlined in Part L of the Building Regulations. It also meets all requirements of the Manual Handling Operating Regulations (MHOR) 1992.

The creation of the Albukhary Foundation Gallery of the Islamic World required three years of dedicated planning, detailed research and collaboration from all suppliers and individuals involved. The result is an aspirational exhibition space that showcases the breadth of the Islamic world, through an interactive environment that allows for safe and regular maintenance. 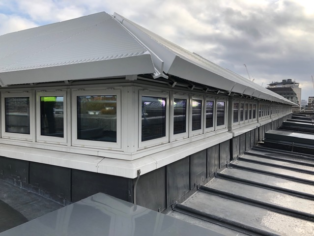 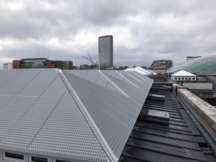 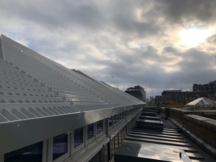