Scotland’s leading housebuilder Barratt Developments, which includes both the Barratt Homes and David Wilson Homes brands, has announced plans to open 16 new sites creating 3,400 new homes across Scotland during the course of 2019.

In addition to its home building programme, Barratt will also continue to increase its investment in land, as it looks to acquire and develop up to 18 new sites over the next twelve months.

Barratt’s 2019 plans underline the Group’s confidence in the fundamentals of investing and building in Scotland, including continued demand for new homes, changing demographics and a strong economic outlook. Estimates from Homes for Scotland have suggested that 465,000 new homes will be required by 2035 in order to meet housing need.

The new sites will underpin over 6,200 existing jobs and support around 150 new jobs in Scotland. Barratt predominately employs local sub-contractors and tradesmen – so local businesses and people will benefit directly from the jobs.

New developments to be launched in early 2019 include Yew Gardens in Ormiston, East Lothian and Huntingtower in Perth.

“We’re looking forward to another busy year of building homes to meet demand in communities across Scotland. Although there are clearly some consumer concerns around the potential impact of Brexit, we’re confident that the economic fundamentals remain favourable towards house building. More homes naturally mean more jobs and, ultimately, homeowners supporting the growth of local economies by spending on local services and goods. We’re committed to not just building new homes, but also to supporting the communities around which those homes are built. That’s why we will shortly be announcing plans to create a fund for local charities to help them improve the quality of life in and around our developments.”

Barratt also sold out on a number of successful developments including Kingseat in Aberdeenshire, Craig Brae in Motherwell, The Woodlands in Dalkeith, Midlothian

Barratt’s success and commitment to quality in Scotland continued to be recognised by industry peers and customers. Thirteen of its site managers carried home awards from the National House Building Council’s (NHBC) Pride in the Job Quality Awards. Barratt was also, for the ninth year in a row, awarded a maximum 5 star rating in the HBF (Home Builders Federation) customer satisfaction survey 2018, meaning that more than 90% of its customers would recommend their homes to a friend. 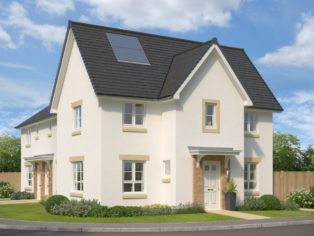