Barratt Developments Scotland has acquired 14 new sites for development, in response to continued growth in demand for new homes.

During the first six months of the year, Barratt Developments Scotland, which includes both the Barratt Homes and David Wilson Homes brands, has acquired sites as far North as Inverness down to the Central Belt. The 14 new sites will provide 2,560 new homes.

Looking ahead to the remainder of the year 2018, Barratt is planning to acquire another 10 sites in Scotland, with a further 1428 new homes.

The news comes on the back of Barratt Scotland celebrating another record year of output, having completed 1730 homes across the country over the last financial year . Home completions were up around four per cent on the previous year.

The Scottish Government has estimated that 465,000 new homes are needed by 2035 to cope with expected housing demand. Housing completions across Scotland in 2017 rose 4.8 per cent to 17,739, but that figure equated to just 806 extra new homes on the previous year.

2018 marks Barratt’s 60th anniversary, having built more than 450,000 homes across the UK since the company began in 1958. As the UK’s largest housebuilder, Barratt Developments made record pre-tax profits of £835.5m in the year to June and built 17,579 homes in the year, the second highest annual figure in its 60 year history.

“Demand for good quality homes in Scotland shows no signs of slowing, in line with a steadily growing population. In order to try and meet that demand, everyone involved in Scotland’s housebuilding industry, from the planners through to the house builders, needs to ensure that the system is fit for purpose so that we, and other house-builders like us, are in a position to meet that demand with adequate supply. For our part, we are continuing to invest in Scotland, acquiring new sites and building homes in popular places where people want to live. The good news is that we’re seeing an increase in the number of locations across Scotland which have become desirable places to live, helping to foster the growth of new communities while at the same time stimulating local economies.” 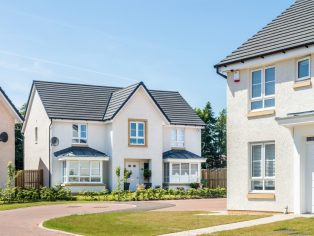