Barratt Developments has won the Macro Employer of the Year award at the National Apprentices Award 2014, beating major companies including British Airways, HSBC and Ford to the coveted title.

It was the first time Barratt, had entered the Macro Employer category of the competition, which celebrates companies who show commitment towards apprenticeships. As a result of winning the prestigious title, Barratt now features in the prestigious annual City & Guilds Top 100 Apprenticeship Employers list

“I’m immensely proud that Barratt has won this award – it’s a fantastic achievement to be recognised by education experts as having the best apprenticeship programme in the UK.

“Apprenticeships have a major part to play in building our business and this award underlines their value to the homebuilding sector and our company.  Many of our senior staff started out as apprentices and have worked their way up, learning as they went.”

Earlier this year, Barratt PLC announced that it would be taking on an extra 1,100 apprentices nationally over three years, a figure the company is already well on the way to achieving. As part of their training, each apprentice will work on an assigned development for some of their working week, as well as taking part in classroom based learning at a local college.

Locally, four of the most recent intake for the company’s East Midlands division of Barratt’s David Wilson Homes are non-school leavers, employed in the role as the division seeks to diversify and expand its skills pool.

“I’ve been working as a carpenter for years now, but I’ve never got the proper qualification, so I’m grateful to David Wilson Homes for taking me on and giving me the opportunity to finally get one.”

“I’ve been working on sites for a while through agencies, but I’m at the age now where I want to be looking at something more permanent, and an apprenticeship should help me get that.”

“I’ve been labouring my whole working life, but I never got the qualifications when I was younger. I see this as a chance at getting into the industry properly and working my way up in the trade.”

“I’ve already done an apprenticeship in joinery, so I’m pretty used to working on building sites. I’ve always wanted to be a bricklayer though, and now that I’m on the course I can’t wait to get stuck in!”

“You can become an apprentice at any stage of your career, whether you’re looking to make a start or have years of experience under your belt and are looking for a change of career. The National Apprentices Award we have just won demonstrates that we employ the very best homebuilders.” 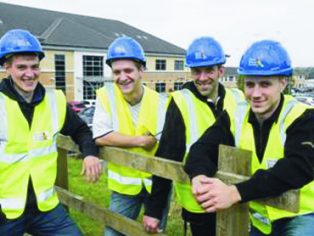