The ET Index Research, which ranks the world’s largest companies according to greenhouse gas emissions and disclosure, has released its annual ET Carbon Rankings and has named Barratt Developments as a Sector Carbon Leader for 2016.

Barratt Developments won the award for ranking in the top three most carbon efficient companies within its sector. The ET Carbon Rankings are compiled from publicly available emissions data taken from company sustainability reports, annual reports and websites.

“Carbon and climate-related risk are increasing. With global corporates responsible for up to 70 per cent of GHG emissions, our ability to keep warming to a manageable level will depend on strong leadership from the world’s largest companies. One of the key purposes of the ET Carbon Rankings is to highlight those companies that are leading the field and taking action today.”

Barratt Developments was also ranked as the top national housebuilder in this year’s Next Generation Sustainability Index, and third overall. The index benchmarks the sustainability performance of the UK’s largest housebuilders, and for the third year in a row Barratt achieved a Gold award, scoring 79 per cent in the index.

Next Generation was launched in 2004 as an industry led initiative to drive best practice in sustainability into the heart of the UK’s residential sector. It is the only sustainable housing benchmark used by the majority of the UK’s largest housebuilders, with an Executive Committee comprised of the Homes and Communities Agency and UK-GBC.

“These awards by two of the industry’s leading indices that rate a company’s sustainability are further recognition for the work we do and how important we see sustainability to be. At the heart of our business is a clear commitment to creating homes and communities that are sustainable places to live. The evidence from ET Index Research and Next Generation helps support that, and underlines our goal of being the leading national sustainable housebuilder.” 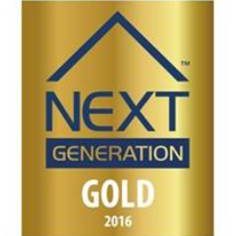