With cash-strapped councils across the UK struggling to deliver enough social and affordable housing, the London Borough of Barking & Dagenham has shown how to build quality homes without grant funding or cross-subsidy from the market housing, while retaining long term ownership of the properties.

Working with a team including developer Explore Investments, architects Allford Hall Monaghan Morris (AHMM) and Pollard Thomas Edwards (PTE) and asset management firm Long Harbour, the council has innovated a new delivery model designed to create a total of 477 affordable and social housing units for its most hard up residents using only private investment.

The project comprises two schemes: William Street Quarter, designed by AHMM and located close to Barking town centre, provides 201 dwellings spread across two six-storey concrete apartment blocks, that face each other across a main pedestrianised street, a 10 storey residential tower and several rows of pre-fabricated terraced housing. And the eastern end of Thames View Estate, designed by PTE and located at the gateway to the Barking Riverside redevelopment, provides 276 units built in traditional brick and block, comprising 151 family homes, 35 duplex flats and 90 one- and two-bedroom flats. The projects cost in total £75 million to construct, split roughly equally between the two.

While traditional methods were used to construct the homes at Thames View, around 71 per cent of William Street Quarter was delivered using the innovative off-site construction technique Design for Manufacture and Assembly (DfMA), developed by main contractor Laing O’Rourke to speed up project delivery by around a third compared to a traditional build, and improve quality. The same system was used to construct a large amount of Sir Richard Rogers’ iconic Leadenhall Building, known as a the Cheesegrater, in the City of London.

Although DfMA has previously been rolled out on several projects, William Street Quarter is the first to include such an extensive suite of products. The scheme’s three large ‘mansion’ apartment blocks include DfMA floor slabs, hollow reinforced concrete ‘TwinWall’ structural walls, and more than 1,000 timber ‘SmartWalls’, a panellised partition wall system that is delivered to site pre-installed with cables and ductwork and external plasterboard, then simply dropped into position by crane simultaneous with the super-structure.

Architects AHMM worked with Laing O’Rourke from the early design stages to incorporate the off-site system into its design, explains project architect Christian Moore: “Our aim was to develop something of a high quality for residents that could also be delivered very quickly. The two mansion blocks are designed to resemble stacked Georgian town houses, of which there are several in the borough, with bands of horizontal grooves cast into the concrete facades.”

The council’s plan to develop the two sites dates back to 2007 when a pilot project was set up under the Labour Government’­­s Local Housing Companies (LHC) initiative, designed to help councils meet their housing targets. Barking & Dagenham put in its land for free, matched by equal investment from a private developer to build the homes.

Two notorious 1950s-built high-rise housing estates stood on the sites were demolished and cleared in 2007 and a new masterplan was drawn up. However, the LHC initiative fell through not long after and the pilot was terminated.

The Homes and Communities Agency subsequently stepped in and funded construction of 31 three- and four-bedroom homes on the Williams Street Quarter site, known as Anne Mews, but the council was stumped as to how to fund the rest. The UK was still in the grips of a recession, the private sector was showing little interest in housing development and the value of the land on both sites had dropped off considerably.

An alternative vehicle for developing the sites eventually came from Explore Investments, based on the idea of leveraging funding from institutional investors with the council managing and renting the properties over a 60-year lease period.

An innovative financial/development model was required to unlock the sites at William Street Quarter and the eastern end of Thames View.

To make it happen, the London Borough of Barking & Dagenham drafted in the expertise of developer Explore Investments, a Laing O’Rourke company, which was already a partner in the council’s Local Education Partnership.

Explore proposed a delivery model for affordable and social housing based on the idea of seeking funding from institutional investors, including large pension funds, who had money available but were perhaps nervous of banks or other forms of investment.

By demonstrating the credit quality of the borough and putting together a detailed plan, it was able to secure investment much cheaper than normal bank finance.

Asset management firm Long Harbour pulled together the funding package, which was agreed on the basis that the council would manage and rent the properties, through the separate company Barking & Dagenham Reside, and pay it an annual sum equivalent to the cost of borrowing the money, plus interest, over a 60-year lease period. At the end of the lease, full ownership of the properties will be transferred back to the council.

The arrangement is not without risk for the council, which must ensure that the properties remain occupied and deliver a sufficiently high rental income for the duration of the lease to repay the investors.

“The trouble is it is difficult to predict what might happen in the housing market and looking at rented property trends over last 50-60 years, rents have fluctuated in relation to inflation,” says Jeremy Grint, head of regeneration at Barking & Dagenham council. “That is why we resolved to properly maintain the properties to a good standard and they are located in very accessible locations, increasing the likelihood we will be able to rent them.”

When viewed from outside, William Street Quarter’s concrete, 10-storey tower and two ‘mansion’ blocks are very angular and stark in appearance, a minimalist look that resulted from the method of construction and AHMM’s desire to show off the material’s innate properties. Explains Moore: “Our design is a direct response to the concrete material, so rather than play with colour it was more about playing with the characteristics of the concrete in terms of sculpting it and creating light and shadow on the facades with the horizontal banding and patternation.”

Thus the box-like shell is broken up by simple circular dimpled patterns cast into the walls and circular perforations cut into balconies. Subtle colour variations have been introduced in the form of green tinted window frames, and balconies in shades of a yellowish grey. Landscaping is a major emphasis, and trees planted along the boulevard between the two smaller six-storey blocks ‘soften up’ the concrete and create a colour contrast.

Most of the DfMA elements, including the cladding, structural concrete columns, planks for the external walkways and sections of ‘TwinWall’ structures, were fabricated at the Explore Industrial Park in Steetley, Nottinghamshire. Laing O’Rourke subsidiary Bison fabricated the hollowcore floor slabs and staircases at its factory in Swadlincote, Derbyshire.

The cladding panel assembly was particularly innovative. Each panel is the width of one apartment and was delivered to site pre-installed with windows and doors, both supplied by NorDan, and architectural metal vent panels. External metal and timber balconies, made by Delta Fabrication, were delivered separately, then clipped to the facade panels on the ground prior to being lifted into position and bolted to the concrete frame.

“That was a huge step forward in terms of safety and working at height as no scaffolding was required to install the facades on the mansion blocks or the tower. It also improved speed of delivery and the quality of manufacture,” says Moore. “We had to carry out a lot of R&D with EIP to devise a system that is both aesthetically pleasing, cost effective and easy to install.”

However, moving such a large amount of construction into a factory environment required greater front loading in terms of the design, he adds: “This kind of system has its opportunities, but also its challenges. To achieve the full potential you have to have most of the design finalised early on as the margin for alterations in the later stages of the build is very little.”

Innovative off-site techniques were also implemented by Kingspan Potton to construct the terraced housing at William Street Quarter, which is designed to resemble brick and block construction, but is actually a timber structural insulated panel system covered by a single outer layer of brick. The entire roof structure of each home was assembled on the ground and craned into position, which speeded up installation and limited the amount of working at height required. “It was a great achievement to design something that doesn’t look pre-fab, but actually is,” said Moore. It’s an engaging visual trick and another example of how Barking & Dagenham council has managed to bring the construction of council housing into the 21st century. 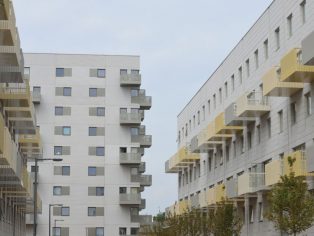