BAM Construction – the firm behind the Co-Operative Group’s HQ, Manchester City’s Football Academy and the current £75 million One Spinningfields development – is moving into some of the best offices in the City – its own.

Around 45 of the 140-strong team are re-locating approximately one mile down Trafford Road into the Metro Building at Salford Quays which BAM itself developed, designed, and built in 2008. The construction business will be joined by its colleagues from BAM Properties, and BAM FM (facilities management) who manage the services within the Metro building. Many more BAM employees are based on site.

“As relocations go, this has a lot of benefits for us. Firstly, nobody’s journey to work is going to be much different. Our central position won’t change. And most beneficially, we’ll be in premises we know well as the Metro Building is a great example of how we can take a building through its entire lifecycle from being merely an idea to running it efficiently.”

BAM has had a dedicated presence in Manchester for several decades and has built a range of diverse and iconic structures across the whole North West including refurbishing the Walker Art Gallery in Liverpool, Cheshire Constabulary’s HQ and Training Centre in Winsford, Manchester City’s Platt Lane Stand, and the 14-storey tower and grade I listed building known as 82 King Street.

Its clients include the Co-Operative Group, Unilever, BAE Systems, and all of the area’s major universities and local authorities. It is particularly known for its market leading position on building information modelling, a collaborative technology, and for its work with communities to help return local benefits from its schemes.

BAM’s team will take the 11,000 sq ft on the second floor. The 72,500 sq ft office was completed in 2008 and is now fully let. Other occupiers include engineering giant Jacobs and IT consultant Insight Direct. The move takes place on Monday 14th. 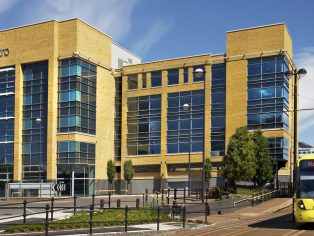