City, University of London has chosen BAM London region to create a landmark new building for The City Law School.

The 7240m² new provision, which BAM won in competition with Wates and Morgan Sindall, was tendered under the Southern Construction Framework.

Valued at around £42 million, the works involve rationalising four existing buildings that form a corner at Sebastian Street and Goswell Road, EC1.

Two of these – a pre-fabricated health centre from the 1970s and a former factory from 1947 – will be demolished. Two other buildings, former factories at Goswell Road and the Myddleton Building, will be retained, but integrated into the new campus.

The University is conscious of the need to respect the local residential developments and the conservation area between the buildings (Northampton Square), and the surrounding Georgian architecture, which will require tree planting and sensitive design. The architect is the award-winning practice Wilkinson Eyre.

Among the challenges for the BAM team is creating a structure on several levels – seven storeys at its highest point – while retaining the separate character of the four blocks, which must nevertheless function as one building. There will be a central atrium space between them.

“This is a typically challenging London scheme which will require a highly adaptable approach, very careful planning and top logistics. But this is what we bring to the table, and it’s going to be an absorbing construction challenge. We’ll end up creating more space and flexibility and greater coherence in these upgraded buildings which will provide for the University’s current and future needs.”

“This is an exciting and significant project for City, University of London, being our largest investment in the estate, and first new build, in over a decade.  The end result will transform the Sebastian Street site and provide The City Law School with a fantastic new home at our main campus that will enhance our presence on Goswell Road, and act as a visual marker to the University.”

Works are just commencing on site, and are expected to complete in mid-2019. 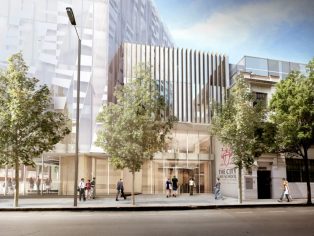