The contractor has been awarded a contract on the refurbishment of the listed 19th Century German Gymnasium within the central London development.

BAM, which has offices in the capital, has been appointed on a pre-construction services agreement to undertake surveys and investigation works on the site.

The overall project – value almost £5 million – will see the UK’s first purpose-built gymnasium, currently an events space, converted into a restaurant ideally located opposite the entrance to St Pancreas station.

A detailed set of preliminary investigations are required due to the building’s heritage status. Built in 1864 to 1865 for the German Gymnastic Society, it is a rare example of the use of laminated roof trusses. Celebrated architects Allies and Morrison – feted 39 times by RIBA – has designed the conversion project which aims for completion by Easter 2015.

The contractor has worked extensively on the King’s Cross development, a massive programme of new buildings in the area next to St Pancreas and King’s Cross stations. It’s largest project has been the University of the Arts, London; one of the first projects to complete. Most recently, it was appointed for Three Pancreas Square.

“BAM is very pleased to continue its work on this landmark central London development. Our work on King’s Cross shows BAM is trusted to turn the most ambitious and high profile projects into reality.”

BAM also transformed the Western Transit Shed into office space and has a series of commercial offices elsewhere in London that have become headquarters for well-known organisations such as Unison, Cancer Research UK, the Metropolitan Police, Macmillan Books, and Burberry. 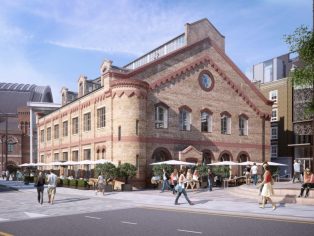