The Bath South Quays development is now in its final design stages and BAM’s specialist design business is also involved. It is the first newly built office building in Bath for over 25 years.

The attractive regeneration scheme runs alongside the River Avon. It is being delivered in a number of phases including the demolition of some existing structures; laying sheet piling foundations for a bridge that will be delivered later, and building a suite of offices.

The enabling works themselves are both complex and extensive and BAM is on site now conducting these under an enabling works agreement. The full £21.5 million scheme will be handed over in phases and completed in 2021.

“The Council have tasked us with a very interesting and very complex building scheme, and that is what we thrive on. It is a fascinating development, which requires our specialist design skills as well as our pedigree in making complex construction happen. As always, the key to success is how we work with our partners and we are delighted to be working closely with the Council and its team to bring about these historic and stylish changes at the centre of Bath.”

Bath stone and traditional brick will be used on the new building, which is in close proximity to listed buildings, requiring both archaeological and environmental oversight. BAM will be required to work sensitively.

“Bath is a very desirable place to live, work in and to visit and we want to build on the city’s reputation as a centre for innovation by providing quality workspace that cutting-edge businesses need. An increase in the number of high value businesses in the city will result in higher wage jobs and improved opportunities for residents”.

BAM’s work in the county of Somerset has included creating schools and colleges, and major schemes for the region’s universities and NHS Trusts as well as for private developers. The company’s history in the South West of England dates back to 1897 when it began the Royal Naval College at Dartmouth. The company turns 150 years old in 2019, with Royal BAM Group announcing 150,000 trees will be planted in reforestation schemes to mark the anniversary. 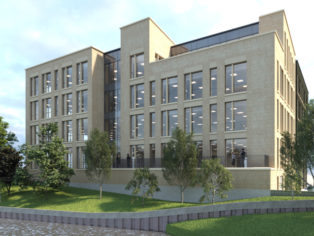