BAM in the Midlands has completed its overhaul of a key Royal Shakespeare Company venue in Stratford-upon-Avon.

The team remodelled the internal space of The Courtyard Theatre to create the new The Other Place which includes a 200-seat studio theatre, two rehearsal rooms, a new home for the Company’s 30, 000 strong costume store and a café bar.

Working under project manager Rob Bassett, BAM started work on the project in February 2015 and completed this month. The contractor took the unusual step of requiring each sub-contractor to complete its work before the next could begin, to ensure safety and quality on the tight site.

“BAM is very proud to complete this modernisation project for the renowned Royal Shakespeare Company.

“It was a very interesting project to be part of due to the nature of the construction itself as well as the prestige of the client. We were effectively creating a building within a box, and at times our mobile crane was touching the ceiling of the existing theatre as it constructed the new steel frame. These are the challenges we love.

“Our working relationships with our subcontractors and indeed the client needed to be exceptional – and they were. In fact I was invited to cycle 300 from Aberystwyth to Harwich with six members of the Royal Shakespeare Company, and I will be cycling from Calais to Amsterdam this April with the same team.

“Everyone bought into the ethos of the project and there was a lot of pride from the people working on it, who recognise the heritage Shakespeare has created for the area.”

Last summer the team was rated as ‘exceptional’ by the Considerate Constructors Scheme for the way it managed its workforce.

The theatre opens to the public on Monday 21st March. 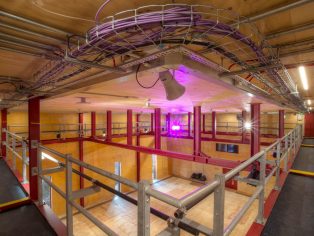